The old, Old Town of Edinburgh

Is it possible to rewrite the history books with a prehistoric discovery? How old is Old?

Recently, I spent a pleasant few hours following self-guided walking tours from the excellent Edinburgh’s Hidden Walks book (by Stephen Millar, Metro Publications 2017), walks which took us from the bottom of the Royal Mile and Holyrood Palace right up to the Grassmarket via a couple of local hostelries and three cemeteries. This is an area steeped in history of course, reflected in interesting anecdotes about famous people, amusing historical incidents and terrible hygiene.

What struck me in particular while walking was the number of instances when historical locations and buildings were marked on the ground in some way, even when the buildings were long-since gone and the places completely transformed from when they were in use back in the day.

At the bottom of the Royal Mile, a circle of beige bricks set into the road between a taxi rank and the Scottish Parliament gift shop mark the location of the Girth Cross for instance. This was the edge of the sanctuary zone of Holyrood Abbey and a place for announcements and executions. Apparently it was removed by 1767, and as this was AD, not BC, its not old enough for this blog really.

Further west into Canongate, also on the road although this time towards the southern side of the Royal Mile is another circle of cobbles set into the tarmac, this one with the shape of a ‘Maltese Cross’ in the middle and with black and red colouration. This marks the location of where St John’s Cross once stood, a boundary marker between Edinburgh and Canongate. 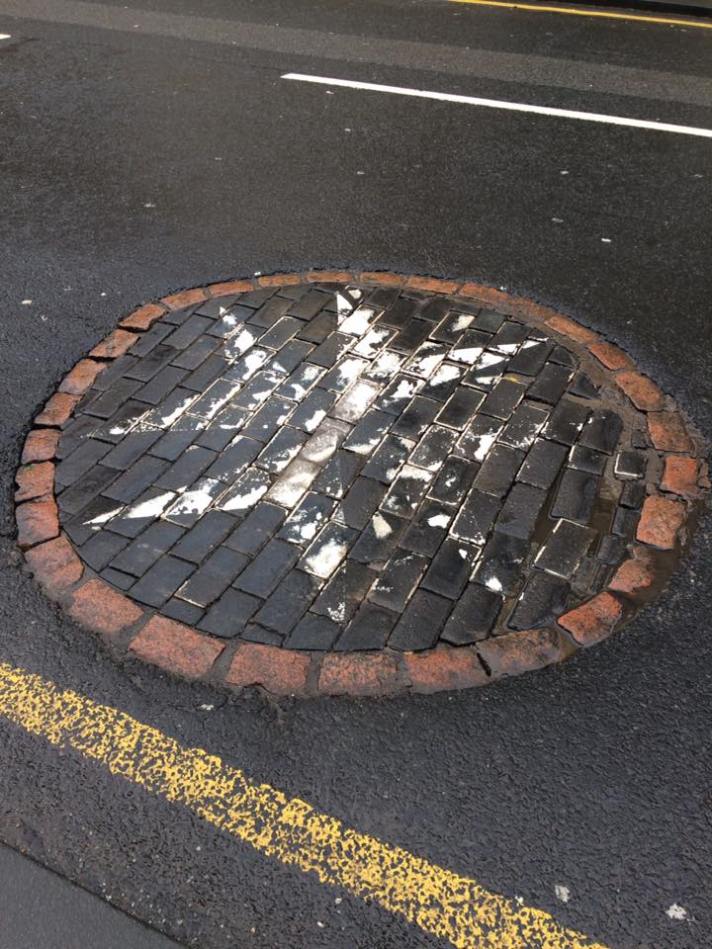 A plaque explaining what this brick circle denotes is on a wall nearby. In the OS Name Book of 1852 is says that this cross was removed ‘long ago’ but clearly not as long ago as prehistory. The Cross itself now sits in Canongate cemetery apparently, although when I was there I was more interested in finding the grave of Ebenezer Scroggie.

Nearby, yet another indicator of a historic structure is marked on the ground but in a different format – angular arrangements of ‘brass studs’ (although to my optimistic eye they looked like golden bricks outside the World’s End Pub).

These show the location and arrangement of the Netherbow Port, a gate in the wall around the town of Edinburgh. It was a place for controlling access and movement, and where executed heads were displayed on spikes; the gate itself was demolished in 1764, not that long ago really.

So, we are actually quite good at marking historical landmarks in urban landscapes, and tourists and visitors are expected to understand this vocabulary well enough to make sense of arrangements of bricks in the street. This sometimes needs additional prompting with plaques, while apps and walking guides can aid the imagination.

But we are nowhere near as good when it comes to marking the former (or even current but buried) location of prehistoric sites, structures and things. We should be lighting it up with neon signs.

That is a shame because prehistory can lurk unheralded and unmarked in the most unexpected of places – such as Edinburgh Old Town.

I came to realise this when turning to the final page of the section of the book on the Grassmarket walk which had kept us amused between pubs for an hour or so. In a throw-away line just before another Burke and Hare anecdote, it was noted that:

Just past the White Hart is the Beehive Inn, also a former coaching inn. In 2008 archaeologists discovered signs of human habitation near to the Beehive that have been dated to between 1500 and 1300 Bc [sic]. Previously it had been thought that part of Edinburgh had remained uninhabited until the 13th or 14th century. 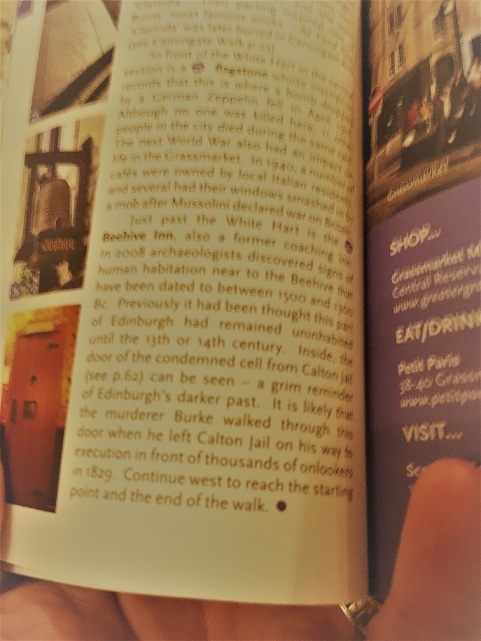 A little research brought me to the stunning realisation that during works associated with the laying of a water pipelines and general improvements in the Grassmarket, Headland Archaeology Ltd had found TWO BRONZE AGE PITS deep beneath almost 2m worth of layers of urban crap in 2008. The Scotsman newspaper did not hold back in its excitement about this discovery.

EVIDENCE unearthed in the Grassmarket has revealed humans were there 3000 years earlier than previously thought. The surprise find – which experts say will “rewrite Scotland’s history books” – puts the earliest known civilisation in the area as far back as the Middle Bronze Age, or around 1500 to 1300BC.

Quite why this was all so surprising is not clear to me, given that this seems a perfectly reasonable place, perhaps on an animal drove route, that would have appealed to an itinerant prehistoric pit digger.

Little of detail has been published about this discovery as far as I can tell. The Discovery and Excavation in Scotland entry (2008, page 69) for the prehistoric features found during the excavations (which revealed much more significant later material as one would expect) was brief but probably comprehensive.

Prehistoric deposits – Two pits were exposed c6m apart in the excavation of an open cut pipe trench located along the S edge of the existing road on the N side of the Grassmarket. The pits were both sealed by a layer of colluvium and lay c1.8m below the modern ground surface. Radiocarbon analysis of material from the pits returned calibrated dates of 2200–1950 BC with a 95.4% probability (SUERC-19840) and 1500–1380 BC to 95.4% probability (Beta-242133). These features are considered indicative of sporadic use of this low-lying area in the Middle Bronze Age.

So there is an old town beneath the Old Town, as if we didn’t already know this, Edinburgh Castle itself having its origins as a fortification in the Iron Age.

But one problem remains – there is no plaque, no marker on the ground, to show tourists, visitors and rubber-neckers and the like exactly where this pair of ANCIENT pits were found. Until the day that Edinburgh City Council get their beige bricks out and become creative, you will find me sitting there, outside the Beehive Inn, pointing deep down into the depths of time. Possibly forever. Please bring me a pint. 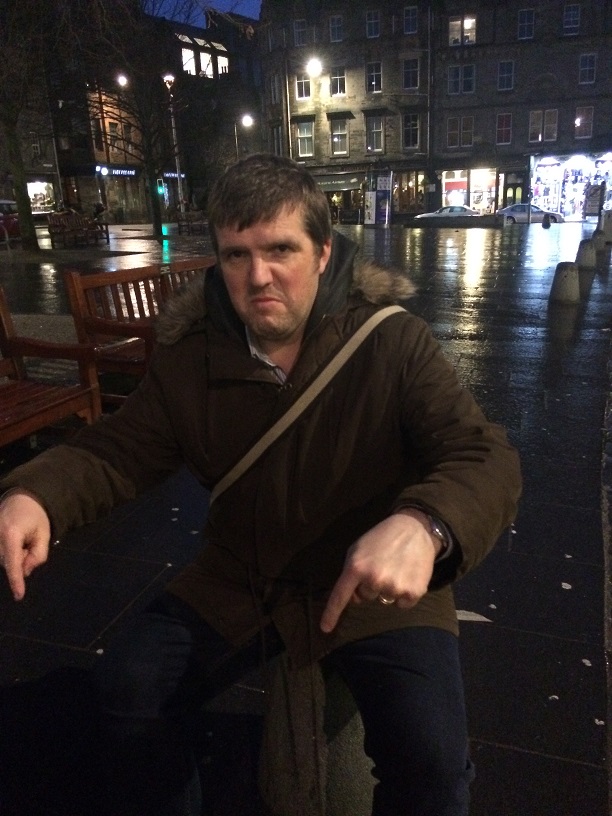 Sources and acknowledgements: I want to once again acknowledge the excellent walking book by Stephen Millar which in the end inspired this blog post, and I believe he has also produced three books of similar nature and tone for London. Jan accompanied me on the walk and took all the photos in this post (except the out of focus one of the book extract). The other images have been credited in the captions. For more information on Graham Fagan’s neon artwork, go here.

2 thoughts on “The old, Old Town of Edinburgh”