“What a great welcome, fabulous atmosphere and amazing journey into past myths and legends.   ” Mrs W, aged 68

“Tales of joy and tales of fright await the avid listener. And when the excitement of the park becomes too much, visitors can enjoy relaxing refreshments at the Viking Foodship. The Mysterymall Gift Shop has many beautiful and unique souvenirs to take home as a reminder to this truly amazing experience.”

While in Ballachulish on New Year’s Day with friends, I took the opportunity to visit a series of standing stones arranged around and within a car park next to the A82 main road. These spectacular grey granite megaliths do not appear to be ancient – and indeed they are not – so what is their story? Why were they built and when?

The curious answer to this question revolves around the rise and fall of a short-lived tourist folly. This place was once Highland Mysteryworld, a bizarre and tacky tourist attraction that was built as part of the economic development of the area in the 1990s alongside a hotel and leisure complex. Despite considerable investment in this venture, it went bust in the following decade, and the building it once inhabited is now a water sports business.

Yet traces of the visitor centre and infrastructure survive, something that became increasingly evident as we wandered around the car park and paused to touch the austere megaliths. Like much urban prehistory, traces of this place jut awkwardly into the current landscape. These are little more than ghostly clues to a rather inexplicable tourist attraction that, if the lack of its presence on the internet is anything to go by, left almost no impression on those who visited.

My one visit with Jan in the late 1990s holds various memories, none of them particularly positive other than that is formed one part of an otherwise spectacular day out in the Glencoe area. No photos appear to exist in our pre-digital archive, but we do distinctly remember an aggressive character who called himself the ‘wee fecher’ (sic). This irritant consisted of a member of staff hiding behind a wall panel. As we walked past, this poor soul thrust out their elbow, upon which was attached a rubbery ugly mask, which gave only a weak impression of a living being, and shouted at us as we innocently tried to pass. A limp textile body hung below this thing to complete a frankly unimpressive effect.

There, I purchased the only material remnant I have of this visit – a key ring in the shape of a megalith with the Highland Mysteryworld logo on it. This fell apart some time ago but for some reason I have retained it, although it was not to celebrate the experience. Rather like my Tomb of the Eagles fridge magnet, or unsharpened Bede’s World pencil, or unused Vindolanda rubber, it forms part of a dubious collection of mediocre-heritage-attraction-tat that lurks in a back corner of a kitchen drawer, awaiting some future event when the whole lot is finally emptied into a bin bag. 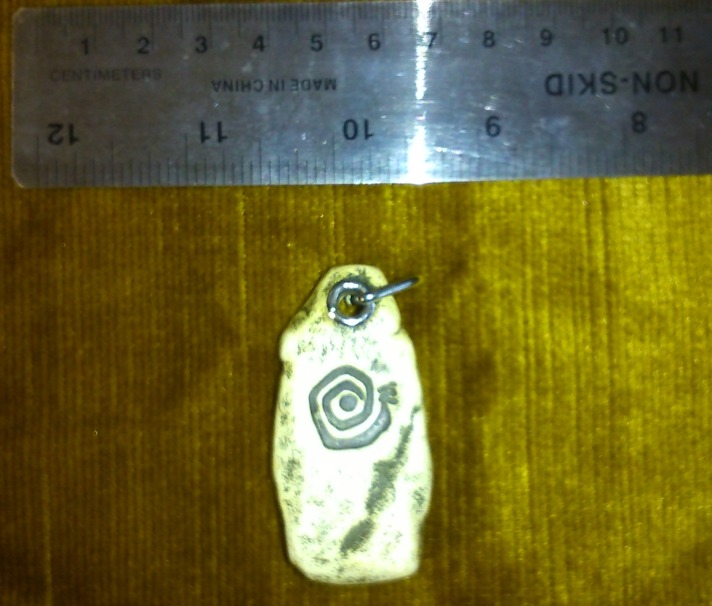 “The theme park will transport guests back in time, with the rich smells, bustling noises and sights of Scotland in ancient times.” 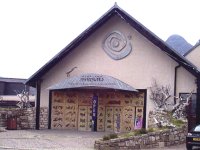 Highland Mysteryworld was a cheesy visitor centre experience celebrating the myths and folklore of Scotland’s Highlands, situated in a pinky-grey building in the grounds of the Isles of Glencoe Hotel. Inside were celebrated, through dioramas, models, animatronics and people dressed up in costume all sorts of ‘characters’ and stories from Highland mythology. These included the aforementioned ‘fecher’ as well as witches, hobgoblins, mermaids and the like. Visitors followed a twisting pathway that allowed lots to be crammed into a relatively small space. And there was a apparently an auditorium shaped like a stone circle (of which I have no memory), as well as a shop and café.

A puff piece in the Herald newspaper dated 26th April 1996 (which is so journalistically poor and credulous that it can only have been a barely amended press release) told the story of the Mysteryworld soon after it opened. It notes that the neighbouring hotel, and the Mysteryworld, were a two-phase development on the site of an old slate mine and thus enhanced the landscape – a dubious claim given the spectacular nature of this location.

The advert, sorry, serious tourism piece, continued: “Like all the best ideas, this one came from the private sector”. Hmmm. The blurb continues, with no sense of irony,

“Highland Mysteryworld is a bold initiative, costing upwards of £1m initially, and although popularly described as a theme park, is a gentler exercise designed to recreate the Highland environment of times long past. It is based around aspects of life from ancient Celtic and Viking folklore with its myriad myths and legends. Charming and romantic today, these were at the very heart of life in the old Scottish way of life when superstition was rife and the elements were accorded great power to influence day to day existence.”

What could visitors expect to see? Well, there was a film show for a start.

“In the Astromyth Theatre, the audience will hear Calgacus the Pict explaining the secrets of the elements, sun, moon and stars. The theatre is built to resemble a stone circle and has some dramatic sound and visual effects. The presentation takes about 20 minutes, well within the boredom threshold of the younger members of the family.”

Sorry for the extended quoting. This stuff is hilarious.

“…at the end of the day, browse for interesting artifacts in the Mysterymall or enjoy some fine food in the Viking Foodship, where real warriors serve up the grub and pillage your empty plates.”

(Who writes this stuff? Can I shake their hand?)

“Highland Mysteryworld is hotly tipped to become one of Scotland’s top ten tourist attractions and is open daily, 10 am till late. The cost is £4.95 for each adult, £2.95 for children. You can get a family ticket for £12.”

Highland Mysteryworld went bust in the early-2000s and is now the home of Lochaber Watersports.

The leaflet for this attraction, which I managed to find the front page of online, perhaps gives us some hints as to why this genius idea failed. It proudly boasts: ‘See Legends Come Alive’. This is overlain on a picture of a small child shitting herself as a horrific Lovecraftian dribbling green monster looms over her shoulder. Below is an image from a new attraction for that year, ‘The tomb of the ancients’ which appears to consist of a sinister monk leering over body parts while parents clutch their kids save they become incorporated into the bone pile. That will teach them to have a minimum 20 minute attention span.

The name of the attraction is written in crazy runes which, along with the megaliths in the car park, hints at the bizarre melting pot this attraction undoubtedly was. It represented something of a conflation of thousands of years of stuff into one simple marketable package. This confusion reminds me of the technological mash-up in the movie Westworld, where robot cowboys re-enact the tropes of the Wild West. Perhaps Mysteryworld should have been the third part of a Michael Crichton trilogy (that also included Futureworld) where the salivating green monster, the little fecher and the death monk all gain sentient knowledge of their animatronic state and take matters into their own hands.

Maybe that’s why the place closed?

Upon parking in the Isles of Glencoe Hotel car park and surveying the various standing stones within and around the car park it quickly becomes clear where a lot of the initial £1 million quid budget went – on erecting at least a dozen very large pink-grey granite standing stones. These are big as well, in the order of up to 2.5m high each; with below-ground components of up to 1m, presumably set in concrete – this represents a lot of granite. These are scattered around the edges of the car park, and between some rows of parking spaces, while two smaller stones still flank the entranceway to this leisure compound. 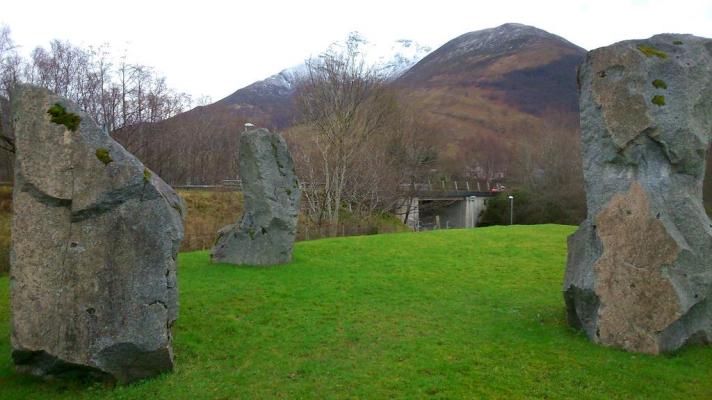 And then there is the building itself. Remarkably, the façade of the bland building in which the attraction was once housed still retains the large logo of the Mysteryworld.

This is the same motif that is evident on my key-ring and recalls of course rock-art, being essentially a cup-and-ring variation with a little M (or W, or both) appended to the end of the spiral.

The steel frame of the door still remains although now is has WATERSPORTS written on it. The entrance itself is entirely different as the photos above demonstrate. I pressed my face up against the brown glass doors that are in place now, peering into the sports HQ to see if any internal vestiges of the Mysteryworld still remain in situ. But all I was able to see was an untidy desk and a lot of empty boxes lying around.

In the forecourt of the entrance area other traces of the Mysteryworld were evident.

Underfoot was a huge iteration of the logo created from carefully arranged grey and beige cobbles, a threshold of sorts, perhaps marking the moment when visitors were transported back in time, a patio-wormhole.

Three little stone heads sat nearby, gurning and making faces: cheeky Highland mytho-heads. The impression they gave me was of three stone giants struggling in quicksand, buried up to their necks in this tourist blandscape. One of them appeared to have spat a cigarette from his mouth in surprise.

Our visit to Highland Mysteryworld was surprising as more of it survived than I would have thought possible, especially considering it was open for  less than a decade and it closed 13 or 14 years ago. Those staying at the hotel or using the car park or adventure playground today may well wonder what these enigmatic bits and pieces represent – something of a mystery to most of them I would imagine, ironically.

On the endurance of megaliths

Even on 1st January there was a steady drift of visitors and tourists wandering around Ballachulish and this megalithic-car-park. Many looked confused, walking between the cold hotel and the cold co-op, past closed public toilets and random landscaping megaliths on the other side of the A82.

The pictured example above is one of several slate standing stones that lies within the tourist hub of this village, and at least these megaliths reflect the quarry that this retail zone exists within.

Ghostly traces of the Mysterworld abound, and these require some explanation for visitors, although in reality there is none. Signs have been amended rather than replaced, editing out the Mysteryworld as a concept. This was fleetingly a place of commerce, a place for coach parties to stop and a place for the consumption of a mythical mashed-up past, a place for investment and the attraction of visitors to actually spend money and not just look at the wonderful views or walk in the mountains.

Surviving only in stone.

Sources and acknowledgements: thanks to Jan, Helen and Erika for wandering around a car park with me on a freezing cold public holiday! Almost all information about Highland Mysterworld came from the Herald article mentioned above (including link) and a few travel blogs and touristy webpages, all of which appeared to regurgitate the Mysteryworld’s own publicity material – these are the source of the unattributed quotes in the post (such as this blog) including those at the start. The two photos of the outside of the Mysterworld when it was open are from here and here. The photos of the interior are both sourced from a blog Steph’s animation blog.