‘What remains of this monument is not impressive’ (Highland Council n.d.) 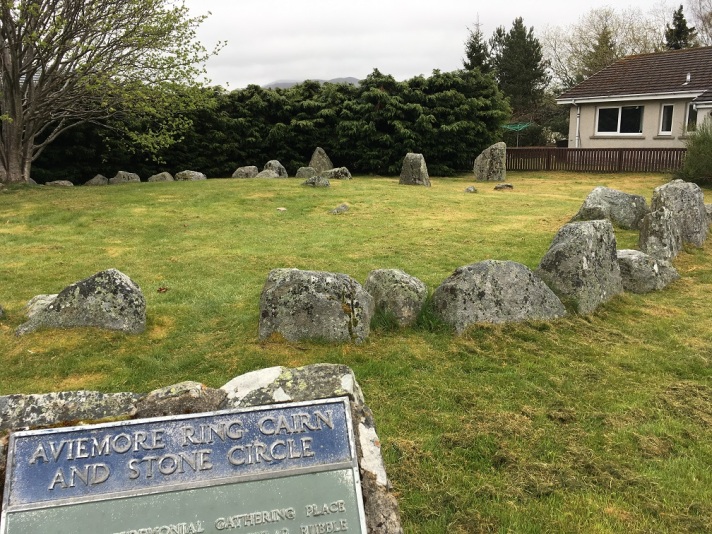 A description of a megalith in the words of others

‘The circle is on the Seafield estate, and…is ignored by the estate officials’ (1).

‘This cairn was built as a major landmark in the open, farming landscape of prehistoric Strathspey, though a housing estate has grown up around it recently’ (3).

‘The Aviemore stone-circle stands about half a mile north of Aviemore railway station, not more than 60 yards from the high-road, and just behind the United Free Church’ (1).

‘The circle can be found at the far end of the village, not the end that goes to Cairngorm’ (8).

‘As you head north out of Aviemore look out for a residential road called Muirton (on your right hand side). Then beyond the Ambulance and Fire Station, turn left (it is all signposted). In a little housing estate is a small circle of stones….’ (6) 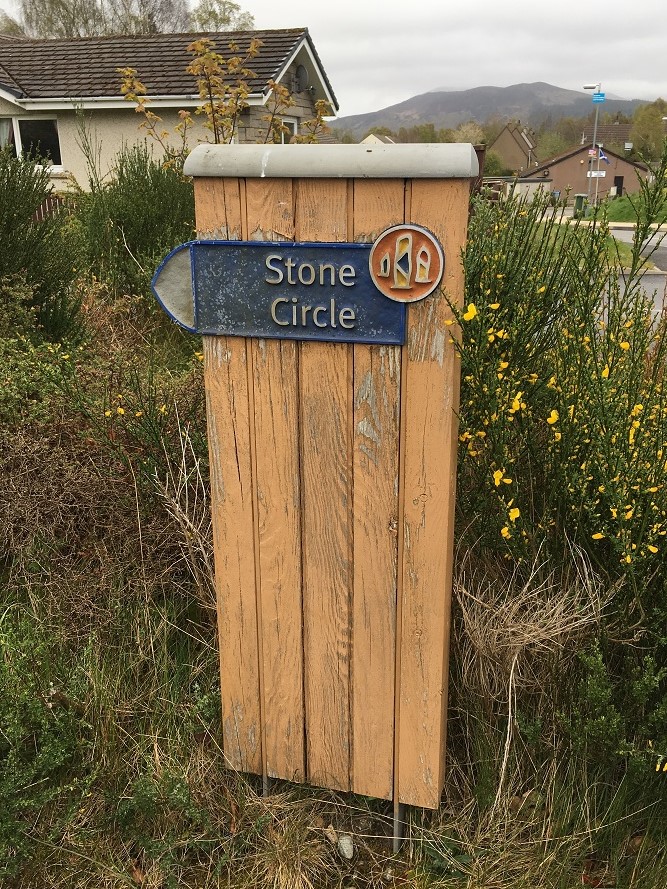 A Clava-type ring cairn, as described and planned by Henshall, except that only three stones now remain of the perimeter of the chamber (4).

‘Aviemore Ring Cairn and Stone Circle (about 2400-2200 BC) originally consisted of a rubble bank, flanked by kerbs both inside and out and surrounded by a ring of standing stones’ (8).

‘It seems evident that this circle has suffered considerable disturbance’ (1)

‘There is very little cairn material left, and the central area seems to have been disturbed. The outer kerb is almost complete, with a diameter of 42′ and slight traces of a bank against the outside; only 5 of the inner ring stones are now visible. The outer ring of monoliths now consists of 4 stones set about 17 ft. from the kerb, but there were 7 in 1877’ (2).

‘The second or middle circle is fairly complete. It consists of probably thirty-six stones’ (1).

‘The south stone stands 4 feet 10 inches high, and has a shape roughly suggestive of a cloaked human figure’ (1).

‘The most northerly lies close in to the second circle, and has, I am informed, probably been recently moved into its present position’ (1).

‘A cup-marked stone is said to have been found at the base of one of the monoliths, but there is no evidence of it today’ (4).

‘These ceremonial stones were placed here approximately 4000 years ago…’ (6).

‘It was probably built about 4000 years ago by farmers and herdsmen and may have had cremated human bones placed in it’ (5).

‘The Aviemore Stone Circle is now engulfed by a housing estate. it …. has been quite sensitively preserved (although a little more room round the edges would have been appreciated)’ (7).

‘Although the houses encroach right up to the stones, giving the impression that the circle was nothing more than a civic monument to spice up a humdrum estate, when you actually get here you appreciate the fine qualities of the site. It is a fine circle, and surprisingly easy to imagine how things would once have been before the houses were built during Aviemore’s expansion in the 1960’s’ (9).

‘The site as it stands is in a poor state of preservation and its location is severely compromised by the close proximity of the modern, cul-de-sac housing estate. The only possible value in this is that the site serves as a shock example of how not to treat archaeological monuments, and possibly survives as an unexpected curio in this late-twentieth century, white-harled bungalow landscape’ (3).

‘Despite the fact that this ‘stone circle’ is within the village of Aviemore, I quite liked its semi-urban location, nestling like a village green ground suicide-grey bungalows at the back of the fire station’ (9).

‘It is nothing hugely exciting but worth a quick peek nonetheless’ (6). 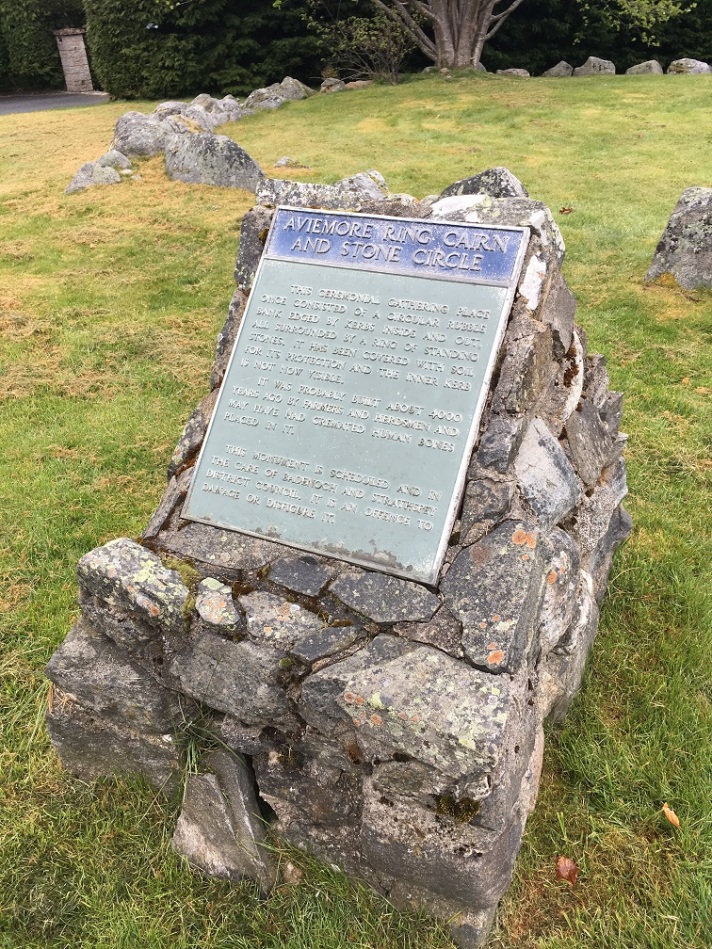 once consisted of a circular rubble

bank edged by kerbs inside and out,

all surrounded by a ring of standing

stones. It has been covered by soil

for its protection and the inner kerb

is not now visible.

It was probably built about 4000

years ago by farmers and herdsmen and

may have had cremated human bones

The monument is scheduled and in the

care of Badenoch and Strathspey

District Council. It is an offence to

damage or disfigure it*.

*With the exception of state-approved urbanisation.

NB ‘The existing panel should be replaced with one that makes full use of modern printing technology to produce a visually exhilarating effect’ (source 3).

Source 6: Trip Advisor entry (the only one for this site, rated Average).

Source 10: My own eyeballs.

Thanks to Jan for providing photos of the site and keeping me company in the drizzle.