Dr Green and I reached the final point of our expedition quite by chance. The end of our journey, marked by an encounter with a monstrous head that neither of us will forget. We had heard reports from locals about the existence of such a head, but had put this down to braggadocio or hallucination brought on my excessive Irn Bru consumption which I believe to be a local beverage with chemical properties that promote altered states of consciousness.

My source had told me that the monstrous head was located in a nether-world of scrap on the southern bank of the River Clyde. My first attempt to catch glimpse of this head, a solo mission, was unsatisfactory, the bulbous orb too distant when viewed from the north side of the river to reveal the details of its concrete physiognomy. 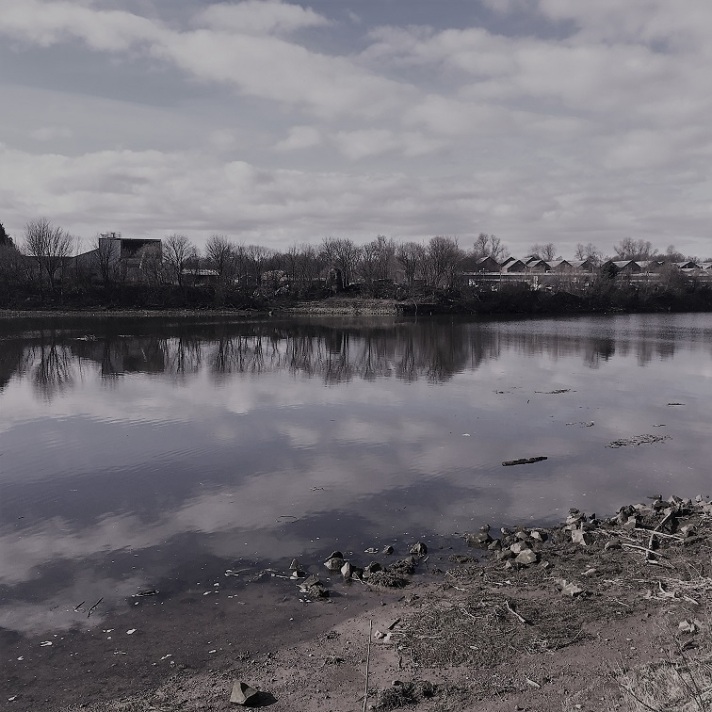 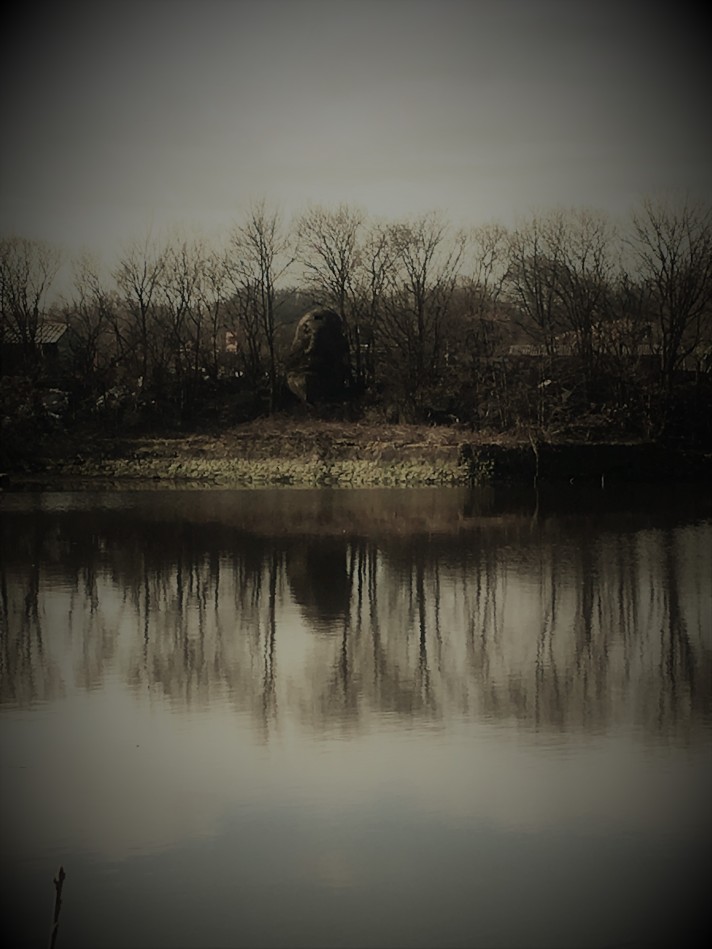 Upon approaching the supposed location of this concrete monstrosity, Dr Green and I spoke to various people who made a living breaking automobiles in this place. Surrounded by skeletal motor cars, carburetors and bent doors and wings, these men affected to tell us they knew nothing of a giant head. Yet we had already caught sight of the dome of its skull behind a portable cabin.

The men gazed on the head with awe and wonder from the safety of their own business premises and were soon evangelising about the discovery to colleagues.

Yet Dr Green and I did not have the luxury of standing back. We had a duty, now we had come this far, to document and record this wonder of human endeavour, to pay our respects at the chin of the beast.

In order to do this we had to pass through a broken post-industrial world of cairns of scrap metal, clawing digging machines and the constant rumble of crushing and breaking. This was the end of all things, the bent remnants of our society piled high as if to reach heaven but only speaking of hell. 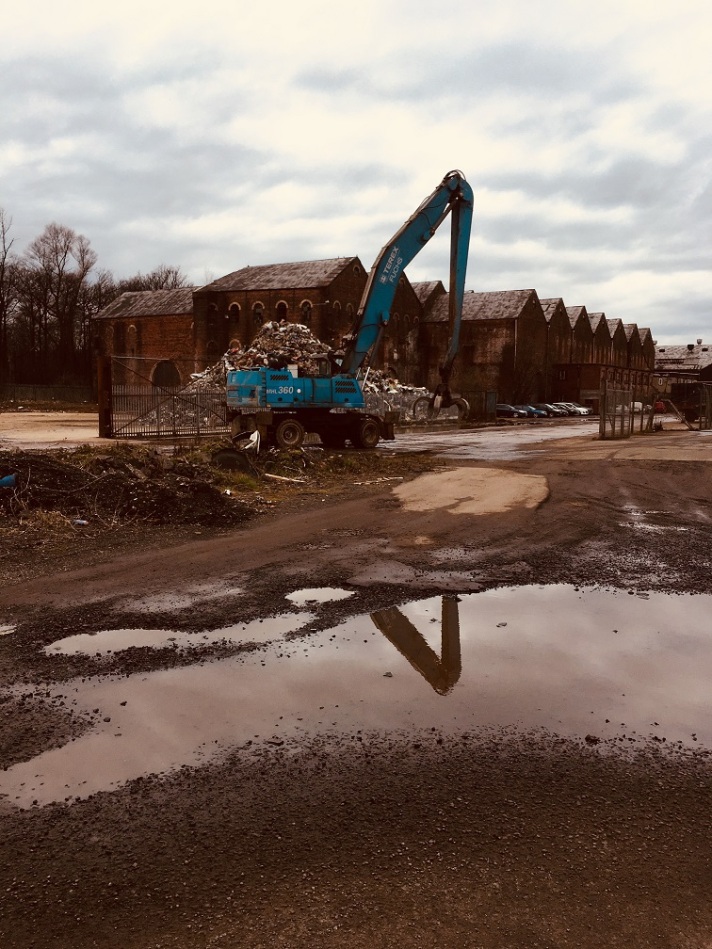 We scrambled through an open fallen gate, circumnavigated some shacks and warehouses, and entered a broad and open yard, across which we espied the monstrous head behind two ruined mechanical units, one of them an omnibus.

Closer we edged, until in front of us the huge bald head stood, balanced atop a linear mound of litter, tin cans, building material and detritus. The dome loomed over us and it felt like it had eyes in the back of its considerable cranium. 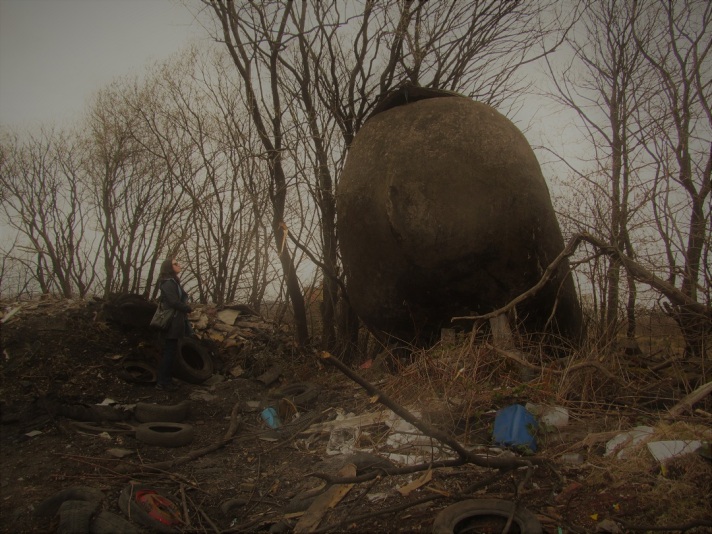 The preposterously sized crown was propped up by wooden supports, better to enable it to loom over any river dwellers and pleasure cruisers sailing by.

As we hesitantly went closer to the megalith, it was clear that it had enormous orifices, dark holes that we could have climbed into should we have wished, although on reflection we decided that dragging ourselves into and along eye sockets and nasal passages would not have been the wisest course of action. It was better that we did not investigate too closely the sense organs of this thing.

An over-sized blocked ear was located on either side of the skull, a closed porthole into the brain. This was a great relief for us as there was no enthusiasm for an exploration of an enormous external acoustic meatus or the accompanying skin flaps. 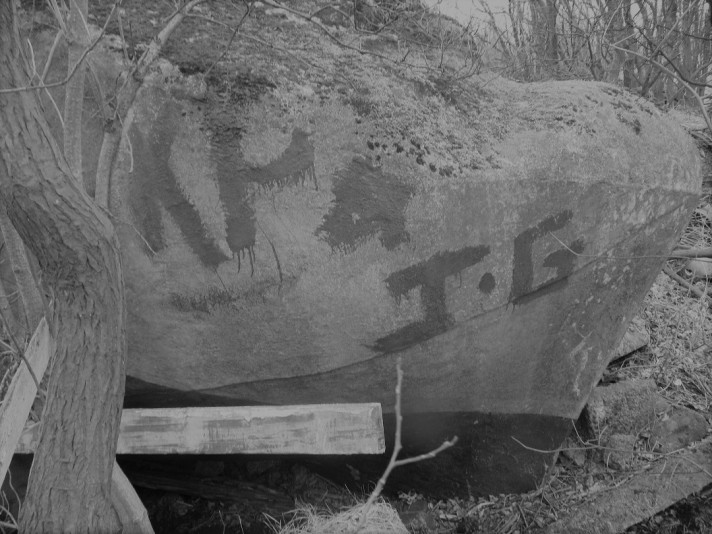 Crude letters were daubed onto the eastern cheek and chin of the hideous noggin. We documented these photographically although could not and cannot discern the meaning of K P and J G. An incantation to be chanted by acolytes circling the head in a frenzy we supposed. Although the paintwork was not red, it had the character of blood that had dried. 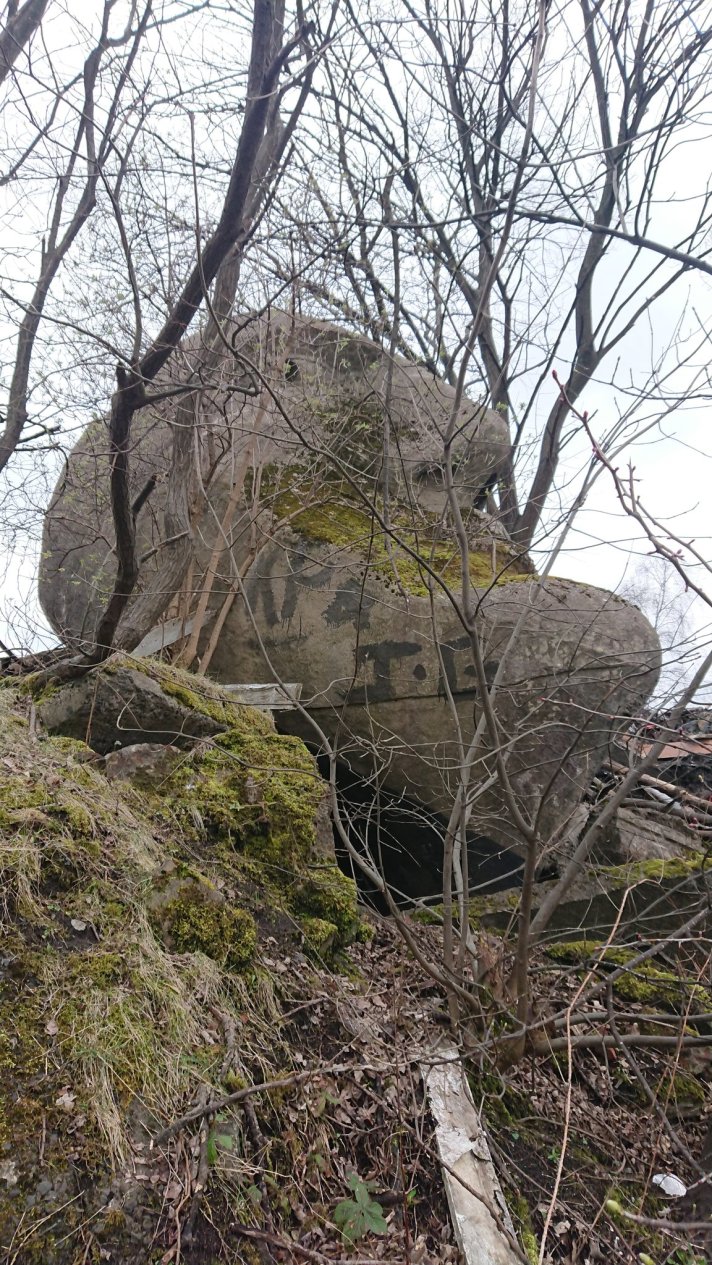 The proboscis emerged from a beard of green lichen, a moss-tache. We realised that this massive head had features that were disproportionate and exaggerated, its sharp angles directional, indicating the north, notably the mandible. Moss balls ran down the spine of the nose, beads of sweat that mirrored out own precipitative glands. A metal loop protruded from the base of the chin, clearly with the purpose of chaining sacrificial animals and – shudder – humans. And in the centre of the face were the eyes, voids into which our gaze could scarcely be arrested, eyes which somehow seemed to look up- and down-river at the same time. Thankfully the oral cavity remained sealed, forming a rictus grin; we had no desire to see what lay within.

As we retreated back to our carriage, we vouchsafed that nothing in our previous existence prepared us for the magnitude of the foreboding, monstrous head that we encountered on the bank of the slow-moving River Clyde that damp Spring morning.

Its dead eyes looked upon us as gods look upon ants. But more disturbing than all of this was –

What we feared more than anything else was that the rest of the body of this titan was there too, buried deep in the foreshore mud and sludge, awaiting re-animation. This prehistoric abomination, this monstrous appendage, this dreadful megalith, this…this…

The Floating Head was one of many pieces of public art that were commissioned for, and displayed at, the Glasgow Garden Festival in 1988. This seminal and fondly-remembered summer event took place on the south bank of the River Clyde about 4km to the east of the current location of the Head.

The big Head was located in the Marina, which is on the left hand side of the map below.

The Souvenir Brochure of the Glasgow Garden Festival notes that the artwork was essentially a boat. “British Shipbuilders Training … helped to fabricate Richard Groom’s astonishing floating head – in reality a cement boat – in the harbour itself” (page 79). I have been able to find a few photos of the Head during the Festival (sources in the acknowledgements), and it looks very different. 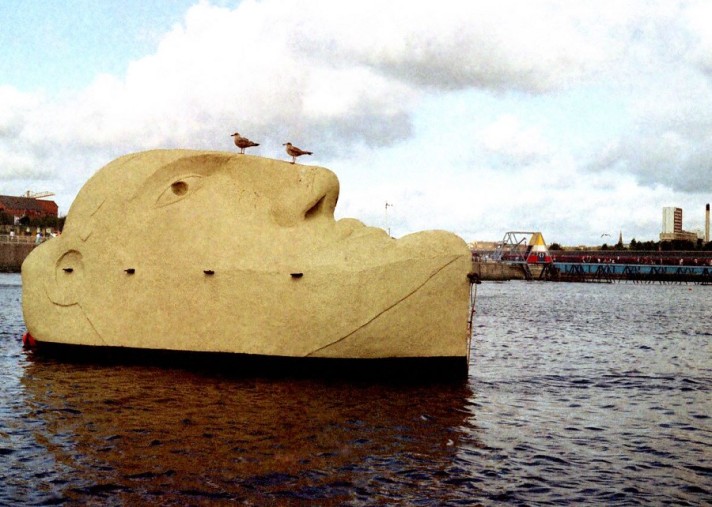 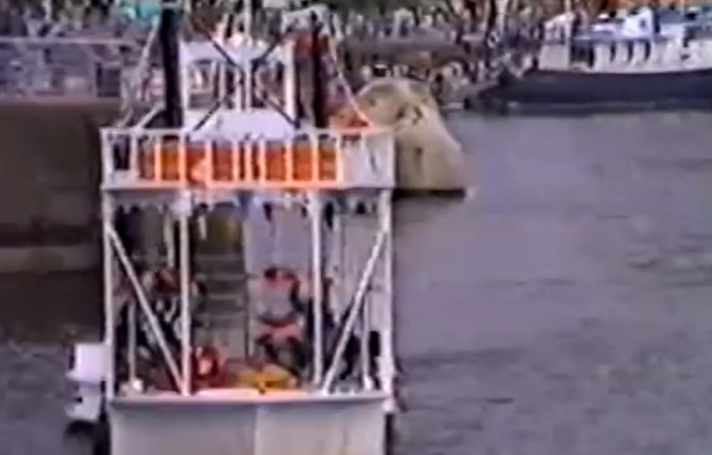 The Festival ended in September 1988 and was dismantled, with various bits of art scattered around Scotland. In this air photo of the decommissioned site, the Floating Head is just visible, now out on the Clyde.

At what point the Floating Head was floated downstream to its current location I do not know. The Head now sits on the south side of the Clyde, near the Renfrew Ferry terminal, in an industrial estate accessed via Meadowside Street, Renfrew (NT 5068 6862).

It has its own record in the National Record of the Historic Environment (canmore). HES fieldworkers visited this monstrous head on 14 May 2015, and noted: “It now sits on the south bank of the River Clyde, adjacent to a scrap yard. It comprises the lower hull of a boat with a fibre glass moulded head on the top. It currently stands upright on its prow and appears to stare north across the river.”

Someone who works in a garage beside the yard the big Head sits behind told us that it had been there for at least 20 years, and that this place used to be a boat yard which might be why it was brought here. The Floating Head floats no more, but close examination makes it clear that it has many boat-like traits.

And now it has been erected, propped up, still an artwork but a very different one, a megalithic head watching boats travel up and down the Clyde, a source of puzzlement and wonder to all those who fall beneath its gaze.

Acknowledgements: I found out about the big head via Hugh Beattie, who posted the following photo on the My Clydebank Photos website. Hugh told me how to find the head, which prompted my two visits on both sides of the River over the past few weeks.

Helen Green accompanied me on the scrapyard fieldtrip, and provided one of the photos in the post above, so many thanks for the support when having to speak to strangers, not my strong point and for her observations which fed into the fanciful narrative that starts this post.

The staff of Renfrew Car Breakers were very helpful and allowed us access to their yard to take some photos. The Head is accessible by the various yards in this location, but permission must be sought, and it didn’t feel very safe. It is better viewed from Yoker on the other side of the River.

The images of the Floating Head in situ were found through various online searches, and attributed (from top to bottom) to: Owen of My Clydebank Photos, unknown, Graham Whyte video screengrab c16:45, Charlie Bubble (Flickr) and Sausage Sandwich (Urban Glasgow blog). If anyone has any other photos of the Floating Head I would love to see them.

My parents managed to find their old copy of the Garden Festival Brochure so many thanks to them for the archive work.