Displayed in a cage, against the house of God, held to the bosom of the Lord.

Between MINISTER and RESERVED. 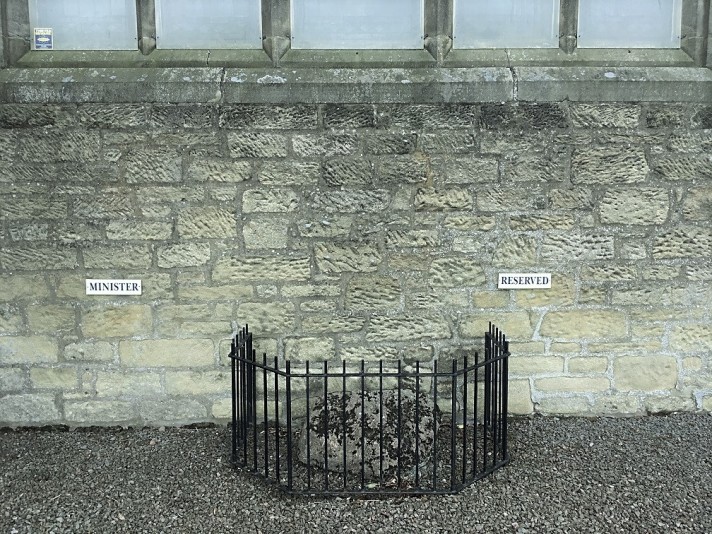 On day release from Hookland. 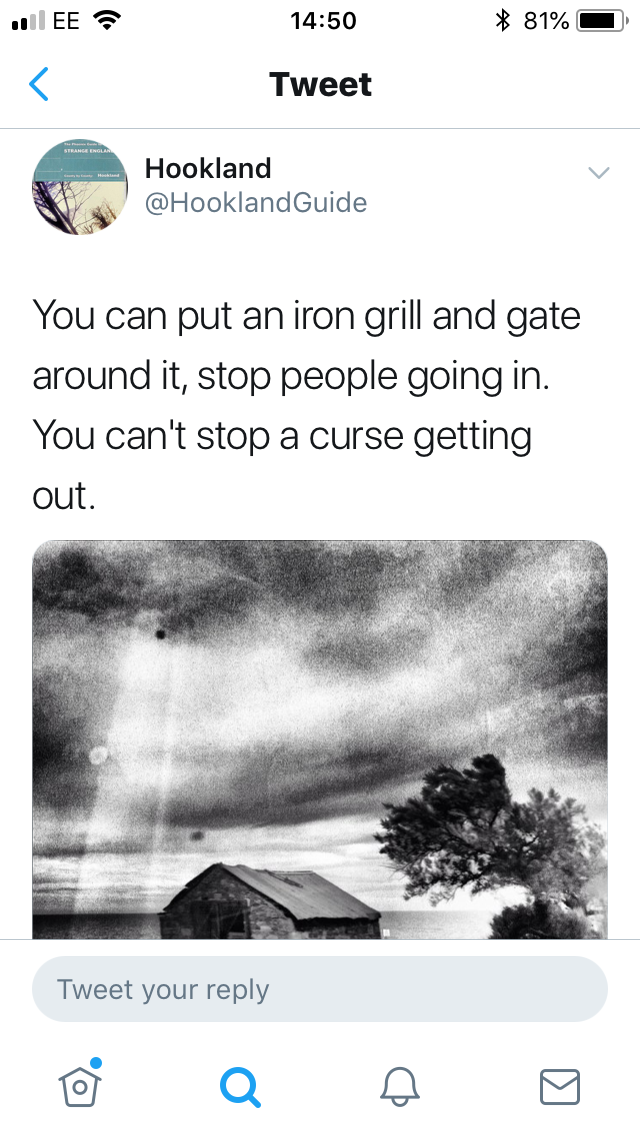 A rock in a cage at the side of the road, victim of  a pagan witch hunt, the fear of the church. A mute, dumb witness like the caged dissembled humans in the laboratory-prison in the Planet of the Apes. Probed, investigated, scanned, scrutinized. 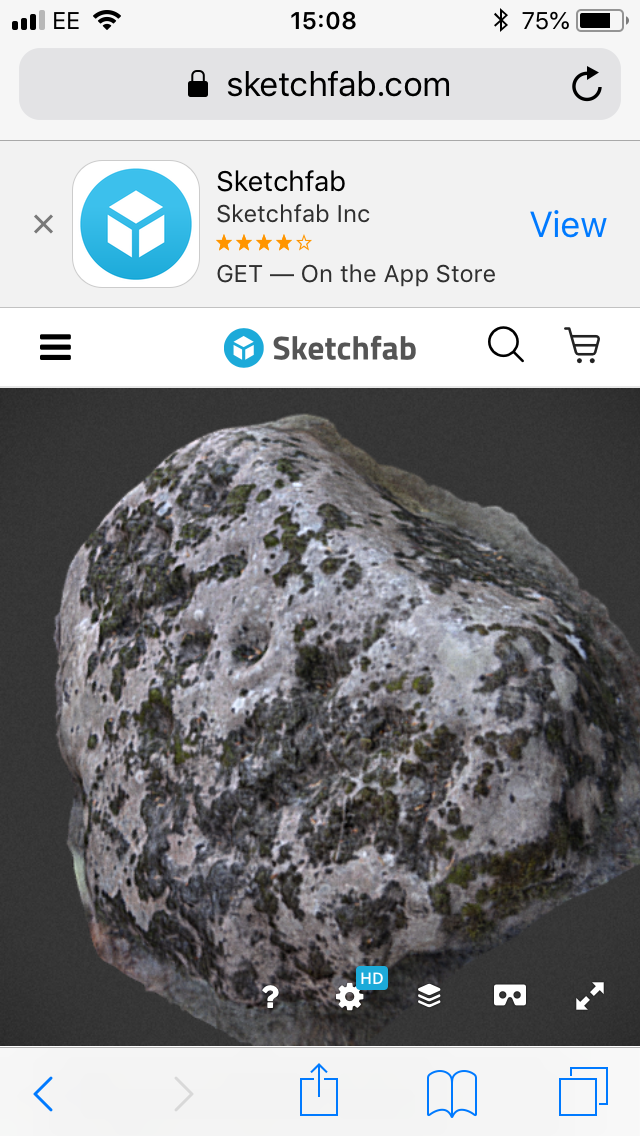 ‘In the absence of certainty, a kind of pressure builds to push away or define the challenge of the stones. Some are caged….’ (Peter Manson) 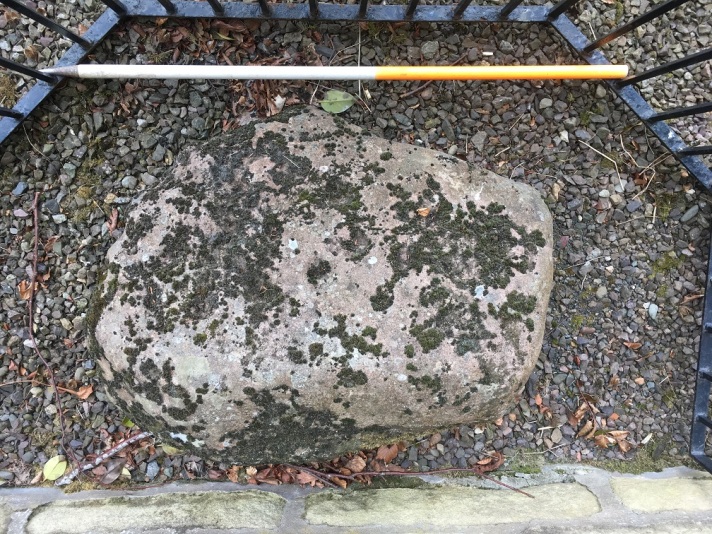 Trapezoidal, a stone torso with a dozen belly buttons, dis-articulated.

Dragged here in the nineteenth century against its will, taken from its rural repose, and propped against a drainpipe. But did it need to be saved? 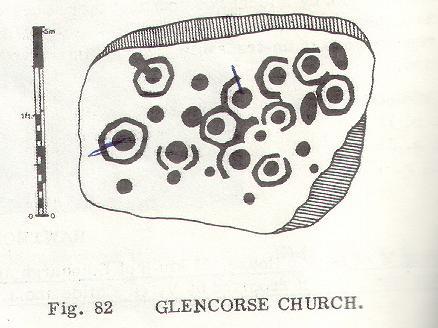 Inventoried by Ronald Morris, the solicitor-cum-rock-art hunter. 22 cups. 5 cup-and-ring marks with grooves. Empirical evidence of a code that cannot be cracked. Not even correct. 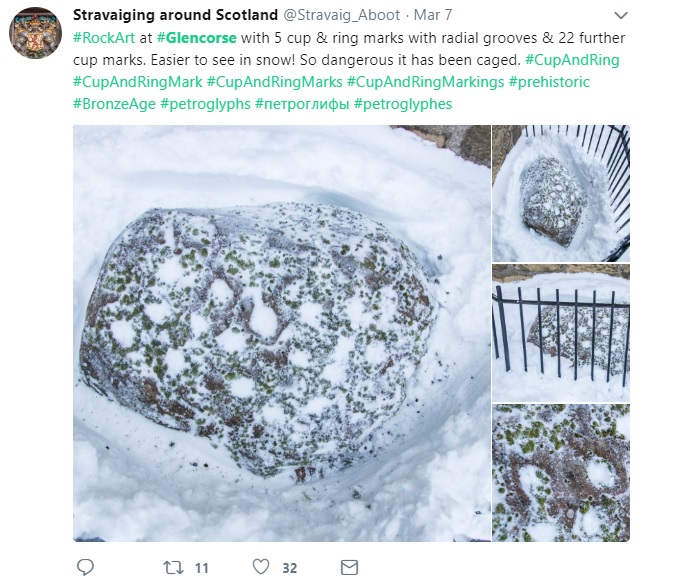 So dangerous it has been caged.

Displayed, against the house of God, held to the bosom of the Lord.

Between MINISTER and RESERVED.

Glencorse rock-art: this single sedimentary rock, measuring some 0.74m by 0.91m by 0.34m, was removed from its original hillside location and propped against the side of Glencorse Parish Church, Penicuik, Midlothian, around 1880. It is said that another rock of similar nature was at this time lost, or destroyed. There are at least 25 cupmarks on the surface, each hollow deeply incised, and some 10 of these have a single ring around them. The surface was probably carved in the Neolithic period (after 3000BC) but other than that we know nothing about it.

Peter Manson: the quote comes from an excellent blog post called Unmoored Stones about Glencorse and other rock-art sites in Scotland.

Sketchfab: an amazing 3D image of the stone, posted by HES’s Maya Hoole, can be explored here. Follow her on twitter!

JAlbum: final image and photo of the stone against a drainpipe came from a fantastic website full of hundreds of great rock-art images, British Rock-art Collection.

Tweets from @HooklandGuide and Stravaigin Across Scotland (@stravaig_aboot) have been included in this blog post. Please follow them!

The rock-art drawing entitled Figure 12.1 comes from the paper ‘Rock art, identity and death in the eba of Ireland and Britain’ by E Evans and T Dowson, pages 103-112 in the book Cummings & Chris Fowler (eds) 2004 The Neolithic of the Irish Sea. Oxbow.