A Neanderthal in Paris

During a trip to Paris, briefly mentioned in my post prompted by the Levallois termination of Metro Line 3, as Jan and I were riding around the city in the relatively cheesy luxury of a City Sightseeing bus (having not actually ever done this before in the dozen or so times we have been in the city), I spotted Neanderthals.

Okay, not real actual Neanderthals, or Homo Sapiens dressed up as Neanderthals, or waxwork Neanderthals, nor  a metaphorical group of Neanderthals in the modern parlance of someone behaving thuggishly (an irritating journalistic tic), nor am I referring to the Yellow Vest protesters we spotted gathering on the Champs Elysees, who were at that time gazing in the window of an expensive jewellery shop for some reason as riot police descended sirens blazing.

No, what I spotted was the silhouette of Neanderthals carrying jagged streaks of spears spread across a poster with a psychedelic background at the Trocadero.

Having realised that we were in Paris at the same time as Neandertal L’Expo at Musee D’Homme, and that the exhibition was about to end (or become extinct) a week or so later on 7th January 2019, we vowed to return the following day.

And so we returned, on the second last day of 2018, via the Metro although I was unable to travel to the Trocadero using the olive-coloured Levalloisian line.

The exhibition was re-reassuringly inexpensive, only adding a couple of euros to the entrance price of the Musee D’Homme, although we did have to navigate a security guard with a gun to enter. 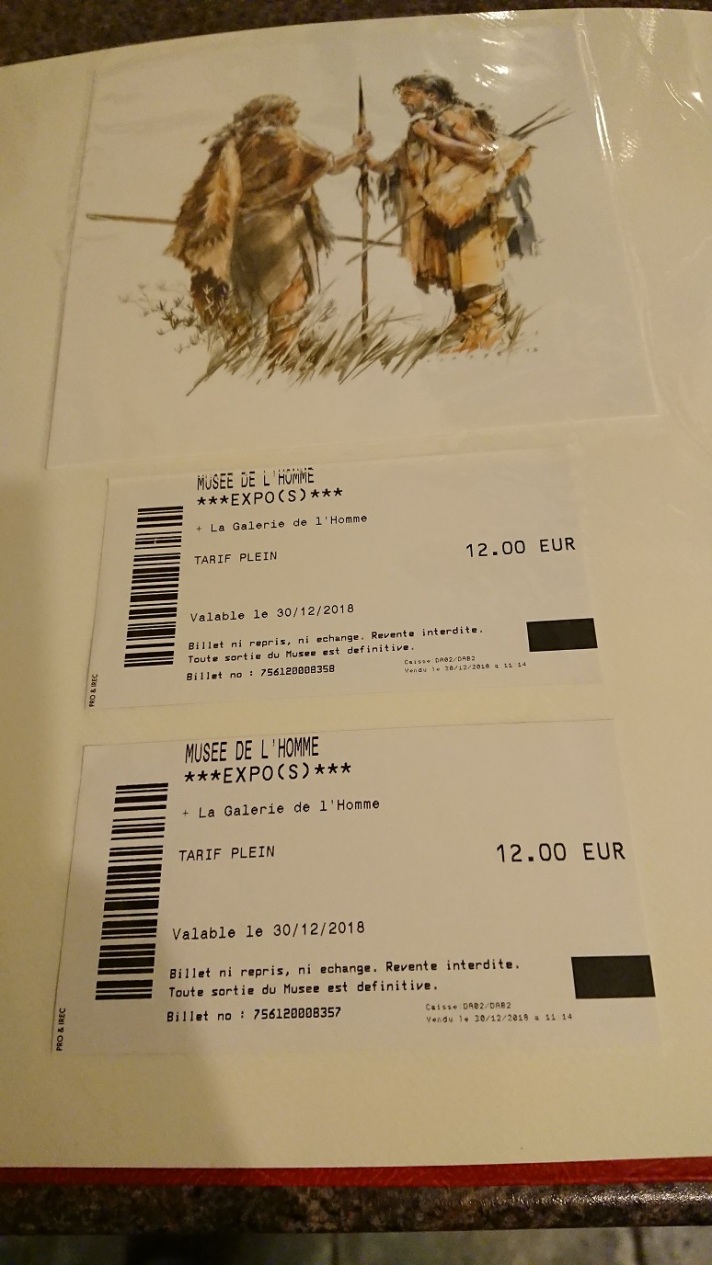 The exhibition was upstairs and we headed straight up, even bypassing the cafe, to head into a network or rooms, more complex than a cave system, that hosted all manner of Neanderthal related goodies. 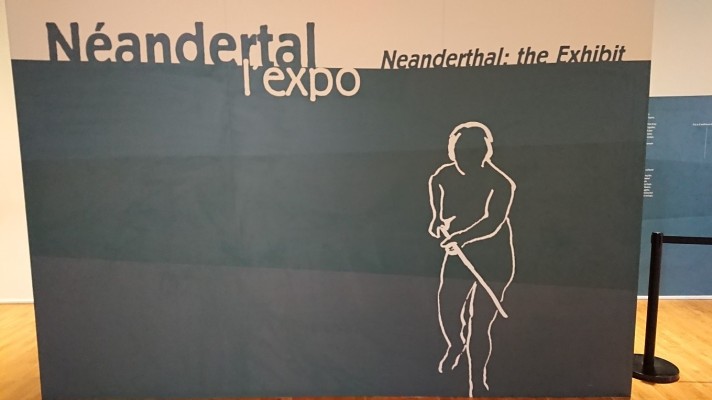 En route, and faster than a hunting rodeo-riding Neanderthal on a squat pre-modern horse, we grabbed copies of the exhibition leaflet in both English and French, and skipped down a corridor before the security guard could wake up.

One of the things that immediately fascinated me about the depiction of Neanderthals in this expo was the urban Homo Sapiens aesthetic that was ascribed to them. This was a recurring theme – Neanderthals were not ‘Neanderthals’ as we crudely characterize and other them, but rather human beings, very much like you and me in many respects. 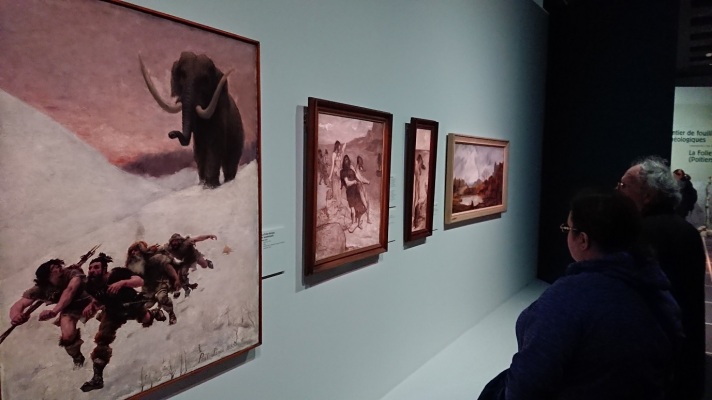 This urban aesthetic was shaped through critique, with crude stereotypes of Neanderthals juxtaposed with claims to their verbal, intellectual, social and emotional maturity. There was an empathetic ethos that ran through the expo like a vein in a rock.

‘…Neanderthals were above all great hunters, skilled artisans, social beings, stirred by symbolic thoughts, who cared for their family members and buried their dead’.

This was conveyed through interactive and often hi-tech displays, alongside some really remarkable skeletal remains including the original type fossil of a skull fragment found in the Neander Valley in Germany in 1856. Something of a holy relic for those who study this period and these people, as was a skull fragment from Saint-Cesaire.

The urban lounge feel of the exhibition was reinforced by a space (2 in the plan below = Take Shelter!) where the floor was  designed to have the appearance of an excavation grid, and excavated features and material culture were depicted using normal conventions at 1:1 scale.

This had a lovely brown and orange vibe suggesting Neanderthals had a seventies George and Mildred aesthetic, a compelling juxtaposition that almost demands a fully worked out thought experiment.

Activity area and key locales like hearths were annotated underfoot, based on the actual plan of an excavated Neanderthal site. Yet rather than looking like a campsite, this space looked like a sitcom living room that lacked only a television and standard lamp in the corner. In fact there were televisions, screens showing information about the space. But no drinks trolley in the corner with a pointless decanter and sherry.

I remember seeing a similar conceit used at the Cradle of Scotland exhibition at the Hunterian Museum in Glasgow and Perth Museum and Art Gallery in 2016. Here, 1:1 scale reproductions of archaeological plan drawings of postholes and other features were turned into carpet. This gave the curious effect for me of walking across plan drawings that I actually drew at 1:20 scale as part of the SERF Project and enabled one to navigate a prehistoric space through the medium of shagpile.

Neanderthals were even ascribed a degree of contemporary chic towards the end of the exhibition in a gallery called Neanderthal Today (11 on the plan above) which was next to Comics Corner. But not this 1966 comic book displayed in an earlier room…

No, in comics corner, Neanderthals were Sapienised, with depictions from graphic novels given prominence, and a selection of such books available to read, including depictions of literally urban Neanderthals amidst high-rises and using Levallois tools as mobile phones (fulfilling, as we shall see, a long-existing commuter-Neanderthal trope). 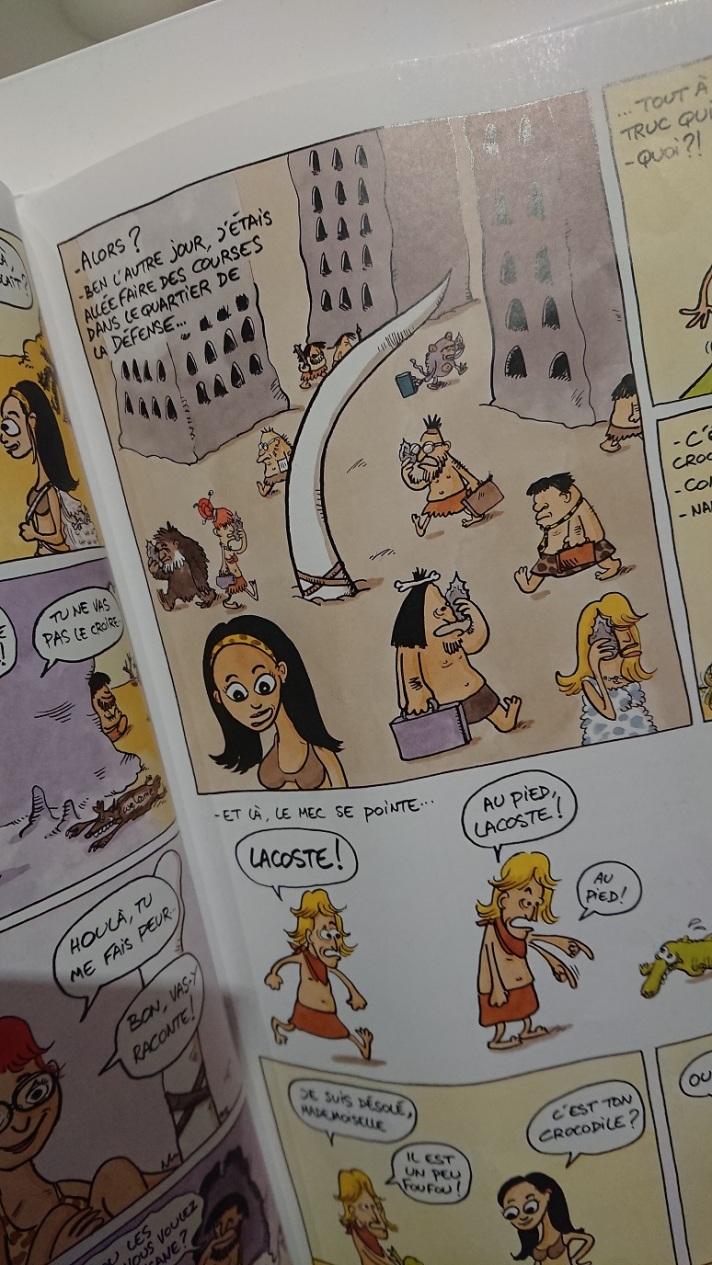 These depictions of Neanderthals have a vibrancy and energy that are compelling and informative, infusing Palaeolithic lives with depth and emotion as many archaeologists studying that period now also do.

But wait! In the middle of this gallery was a slightly creepy Neanderthal figure dressed in contemporary clothes, looking rather like a school teacher, and holding a magazine with a picture of herself on the front cover, Neanderthal introspection in a study of infinite regression.

This did not really surprise me. Dressing Neanderthals up just like us has a long tradition, and it is used as an effective means of conveying similarity over difference, although in  the past this has been done with mixed motivations and levels of seriousness.

Appropriately, in light of the connection with the Paris Metro highlighted at the start of this blog post, there has been a recurring trope of reconstructing Neanderthals (as mannequins, waxworks or just people dressed up with big fake noses on) as commuters, always in smart suits, usually on trains and subways. It is almost as if the state of being-a-commuter is regarded as a universal human trait, and to be fair, I can’t think of any other species, hominid or otherwise, who would waste so much of their life travelling to and from work. This seems to me such as Western, capitalist, vision of humanity, and boy have Neanderthals been sucked into our world.

This is a surprisingly pervasive cliche amongst archaeologists and human anthropologists. Shannon McPherron (Max Planck Institute) said in 2013, “sometimes they’re absolute brutes that have nothing to do with humanity…and other times you put a suit and a hat on a Neanderthal and they could slip on the New York subway train and be unnoticed.” [The Atlantic, August 12, 2013]. Evelyn Jagoda (Harvard) more recently suggested,  “If you saw a Neanderthal dressed in a suit on a train,” Jagoda says, “you would just think it was a slightly ugly guy.” [Atlas Obscura, March 9, 2016]. Hardly flattering stuff and a bit skin deep (or shallow).

But you can see that this Neanderthal-commuter cliche has some heritage….

In actual fact for decades we have been making businessman of Neanderthals, so at least the Expo in Paris mixed up the gender, although it could be argued formal dress was still the order of the day with a businesswoman level of formality. Why do we keep doing this sort of thing?

I want to see Neanderthals in jeans, t-shirts, bikinis, onesies, football strips, high heels, leathers, Alan Partridge stay-pressed-action-slacks. And anywhere other than in an office, on an escalator, or riding a bloody train. Please no more Titchymarsh. There is only so much urban prehistory even I can take.

In case you were wondering, ‘The Neandertal stoneware perfume bottle is slip cast from a flint knapped hand-axe then fired and vitrified at over 1400 degree C. Each bottle is handmade by the artist Kentora Yamada’.

Stick that in your chaine operatoire.

The odour, ‘an overdose of several high-impact, steroidal odorants against lighter aquatic elements’ sounds to me like eau de sweaty commuter, probably that guy out of American Psycho, so it is right on message.

If we are going to urbanize the Neanderthal – make them urbane – then we might as well reflect our mixed-up ancestry by implicating them in all of the things we do and all the people we can be. That is why the comic book and graphic novels on the subject are so powerful (although even one of the examples above as noted depicts Neanderthal-commuters on their lithic mobiles).

The exhibition really stimulated my senses in a way that an overpriced watery scent could never do, and helped me to find a Neanderthal in Paris.

Sources and acknowledgements: thanks to Jan for accompanying me, and for taking some of the photos in this post. I think all other sources of information used are linked to in the post above, happy to be corrected on this if wrong…..

One thought on “A Neanderthal in Paris”