Crannogs are not usually known for making dramatic entrances.

But in the nineteenth century the crannog that once stood in Kilbirnie Loch, North Ayrshire, erupted from the water due to decades of industrial dumping, in a stark illustration of what can happen when prehistory runs into the juggernaut of industrialisation.

The remarkable event that lead to the discovery and investigation of the Kilbirnie Crannog in summer of 1868 was most colourfully captured by Robert Love Esquire a few years after the event. 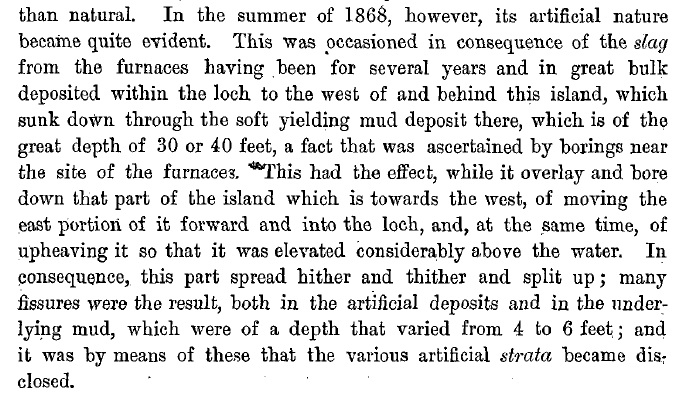 A small stony island had been noted in this location before the slag-eruption. It was known locally as the cairn.

But nothing had prepared local people for what popped out of the water, demanding attention and re-evaluation, nothing less than a prehistoric ejaculation.

Subsequent investigation of this mound spewed forth in the southwestern corner of the loch showed it to be a crannog, an artificial island probably dating back to the Iron Age. The island measured 22 x 24 metres across and was up to 1.25m in height above the water level. It was located 60m or so from the shore of the Loch and was connected to the land by a perilously narrow causeway that dribbled from the loch shore. This may have been a more substantial bridge to the crannog in the Iron Age.

Excavations were undertaken in 1868 soon after discovery. This revealed that the island consisted of several layers (starting with the lowest, earliest phase):

On top was also the indication of rectangular buildings in the form of postholes and scattered animal bones. Little else was recorded of this excavation, but we can presume that this was one of many such artificial islands with a house on top found in this part of Scotland, and it would have been supported on wooden piles driven into the bottom of the loch.

Soon after, this crannog became completely engulfed by the slag and furnace waste being dumped from the nearby and ever-expanding Glengarnock Ironworks, as shown quite clearly when we compare Ordnance Survey mapping from 1858 and 1911.

Occasionally, other prehistoric secrets popped out of this muddy loch foreshore, including an amazing and decently preserved wooden log boat as documented by the ubiquitous Ludovic McLellan Mann. He recounted that on Tuesday 22nd April, 1930, a Mr Thomas Miller investigated a wooden stick protruding from the muddy foreshore of the loch and found it to be a canoe made of oak. The photo below shows the industrial waste-land that this boat was found within, the massive slag heaps in the background dominating the local landscape.

And so it came to pass that the crannog had, by the turn of the twentieth century, been engulfed and eradicated by the industrial sludge, a victim of industrial terra-forming where even the loch could not hold back the heavy metal, its southern shore gradually creeping north.

Fast forward to 2017. The ironworks, once the major employer for the towns of Glengarnock and Kilbirnie, was finally closed in 1978 and this void was filled (at least spatially) with Glengarnock Business Park. The Iron Works had gone the way of the Iron Age (overtaken by steel and then the Romans, er maybe not the last bit), to be replaced with business units, car parks, shiny new fences and corporate branding. The location of the crannog was covered with a car park, a road verge and a steel fabrication factory. So it goes.

I visited Kilbirnie for the first time ever on 5th April 2017. I had been invited by Gavin MacGregor of Northlight Heritage to come along and help lead an urban prehistory walking tour to find the crannog location. This walk was one of a series that Northlight had been leading in partnership with the recently established Garnock Connections Landscape Partnership Scheme. 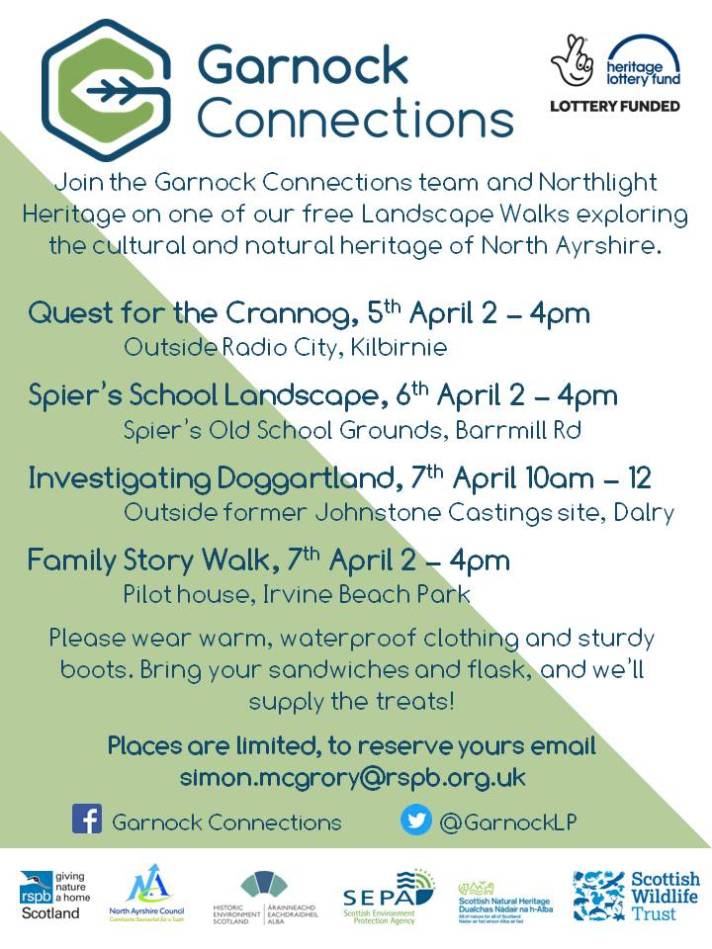 We gathered in the early afternoon, after I had consumed a massive cake, in a diner in the renovated Radio City cinema, and after introductions, our small group set off on the quest for the crannog. We left the centre of town and passed an old railway platform on the now defunct Caledonian Railway, then followed a pleasant core path away from town towards the ruins of the Glengarnock Ironworks.

It really was a massive cake incidentally. One of those caramel tarts that used to be commonplace in school dining halls when I was a child, shiny with little brown vermicelli things on top, and rich with an interior cream deposit. Note to self: I am not good at describing bakery. 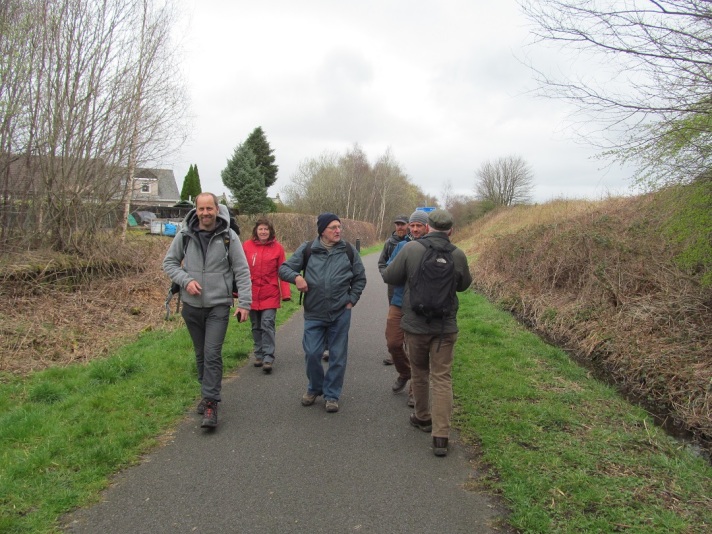 We passed the ruins of a slaughterhouse and a cairn of bricks, and then a bin with a skull painted onto it. It felt, as we neared out destination, that we were slipping back in time, deep into prehistory. 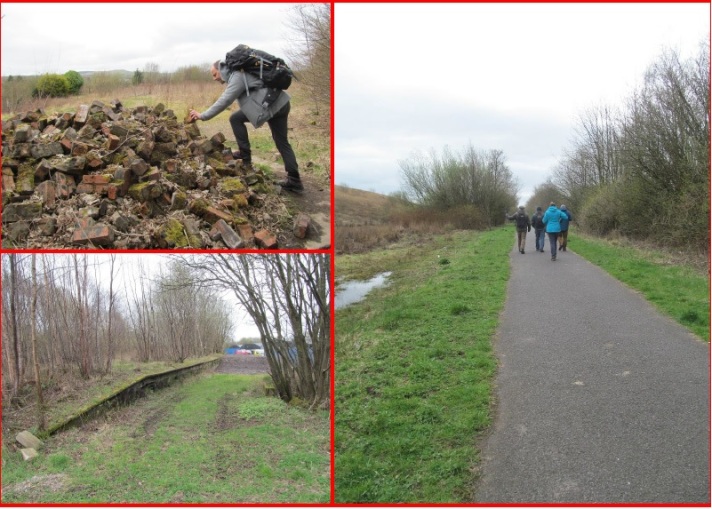 Finally, we began to see the footings of buildings in the scrubby vegetation on either side of the path, ruins of the trappings and infrastructure of industry. One of our group worked in the steel works and pointed out where various offices had been located. He told stories of explosions in the night when he was a kid, the outcome of massive amounts of red hot slag being dumped into the much-abused Kilbirnie Loch. He was an old man, but not old enough to remember the crannog.

Our destination was reached, a most unpromising and placeless location, partly a car park, partly a bushy protuberance under the guise of landscaping.

As a group, we stood in the location where 2,000 years ago we would have been under water, and a timber house would have stood resplendent on the loch. The encroachment of industry onto this body of water had turned this location from one of elite settlement, to corporate blandness, a Ballardian transformation and perhaps the inevitability of capitalism.

How many prehistoric sites now lie beneath, or have been found during the construction, of business parks, warehouses and industrial units?

More to the point, what can we do about it? Sure, such discoveries allow us to gain valuable information about the past (unless the site, like this crannog, had already been swallowed up) but can they be made into something more useful than just data sources? Conversation on the walk constantly turned to how we could make more of the heritage (industrial, railway, prehistoric) of Kilbirnie, to engage and educate locals about the deep time in the place they live, and to attract tourists and visitors to a town often bypassed en route to Arran. One of the locals even told me they had a longterm plan to build a crannog reconstruction in the loch, a crazy idea that floored me and inspired me at the same time. I had not thought this big, but why not? 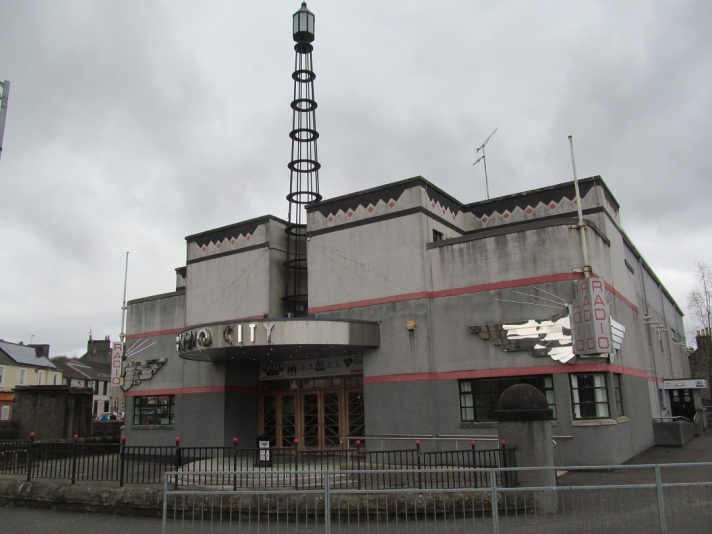 The heritage of the town is gradually being foregrounded again, whether in the re purposed Radio City building, or in the recently decorated windows of an abandoned and ruinous warehouse building adjacent to the local Tesco in the town centre. These windows, covered in historical images created by local school kids, include medieval objects that have been found in Kilbirnie Loch over the years, giving up some more of its watery secrets under the relentless pressure of heavy industry.

One day I hope that Kilbirnie residents and visitors will be able to walk the old and ancient paths of this town, following the railway lines that were once the arteries that connected this place to the industrial heart of Scotland. These paths may lead to a spectacular watery eminence, Scotland’s newest crannog, or at least a QR code telling you what was once here.

The best resource this town has though, is not the prehistory, or the industrial heritage, or even the amazing massive caramel tarts. The places and the things can only take us so far, and what energised me most about my visit was not the crannog beneath the steel fabrication car park but the people and their memories of the iron and steel and explosions and junior football teams and mills and slaughterhouses and railway platforms that were once stood upon. The people and their vision for the future, borrowing inspiration from but not stuck in the past.

Sources and acknowledgements: primarily, I would like to thank the local people, and team from Garvock Connections, who accompanied Gavin MacGregor and I on our urban prehistory walk to the crannog. Their enthusiasm and ambition was infectious, and I hope to work with them in the future to re-invigorate Kilbirnie’s Iron Age!

The sources for the discovery and excavation of the crannog are almost certainly repeating the same account, with the original account being that of archaeologist Cochrane-Patrick. All three of these sources can be found in full online with some careful googling:

The maps were all sourced from Scotland’s National Map Library