Standing stones in the parks.

Monuments in the shadows of tower blocks.

This is a walk in the megalith city.

A walk with great expectations.

A walk with surprises.

A walk coloured by disappointment.

A walk informed by insider information.

A walk enlivened by vandal paint.

A walk spiced up by dirty secrets.

A walk back and forth through time.

Not a walk, but a crawl. An urban prehistory crawl.

Four locations, all within easy reach of the massive malls of central Cardiff, reached via paths through parks and underpasses, suburban streets and dual carriageways, over bridges and under tunnels.

The first in parkland, Bute Park, the Gorsedd Stones. This monument is one of many in Wales that have been constructed for the annual Eisteddfodd, this example being built in 1978. (This practice has now stopped, with a ‘portable’ stone circle now in use instead.) The stone circle sits in open grass beside an extremely large circular metal bin dressed with a big green bin bag. It consists of 12 reddish sandstone monoliths of various heights and shapes.

Within the centre lies a huge flat block (known as a Logan Stone), inviting outlandish interpretations of a sacrificial altar, but in reality a fine vantage point for visitors to clamber on to. Wear to the ground surrounding this large block, and assorted litter, testifies to its popularity. Leafy matter is smeared on the upper surface.

The stones themselves are marked with various episodes of graffiti – large and small writing, abstract squiggles in red, blue and white and an enigmatic compass-point design adorns one stone on the northern side of the circle.

This monument was constructed for modern druidical ceremony but now serves the more prosaic role of urban parkland furniture, with a different form of sun worshipping preferred in the summer. The circle can now be admired and framed if viewed from the south, partly shielded by the ill-conceived bin.

Something to do with death next.

To Alexandra Gardens, where megalithic memorials are commonplace, one of the most prominent being the Falklands War memorial – a large granite megalith sourced from the Falklands sat atop a large plinth. (I have mentioned this in a previous blog post.) This sits in the centre of manicured grass and periodically a gull landed on its head and surveyed the city. A man sat on a bench behind reading a newspaper in the sun. 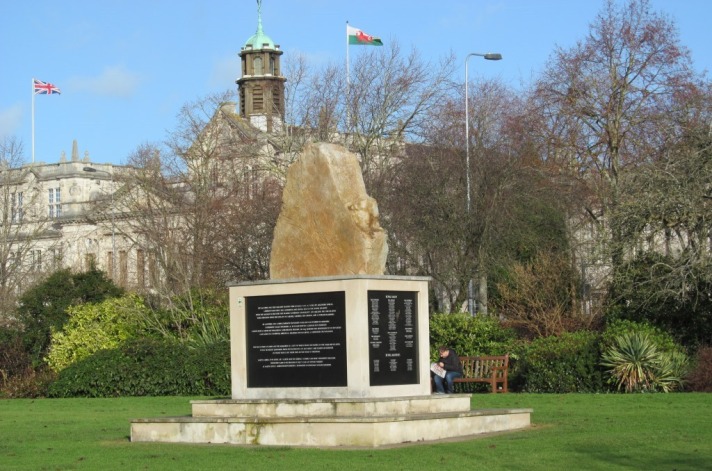 Nearby, a jagged megalith was apparent with a brass plaque on the side, memorialising volunteers from Wales who fought in the Spanish Civil War. The plaque shows a tree, thus meaning this monument embodies stone, metal and wood. It reads: You are history. You are legend.

We spiral helter skelter down towards a less noble looking monument. Beside an infamous fairground (the ‘Winter Wonderland’), overlooked by the no doubt oxymoronically named ‘Fun House’. We crawl up to the edge of a caged stone circle past a lamp post sprayed with almost wilfully illegible initials and a bin vomiting its contents all over the threadbare grass upon which it sits.

This is a grubby monument, spoiled by the detritus of alcohol consumption, fast food gluttony and puzzling quartz eruptions. Underlying this façade, a sense that this was once, and could still be, an arena for shady sex acts, consummated amidst the conglomerate, beating about the bushes, surrounded by erected monoliths. A place where Tom Jones could hide. This is a degraded monument, the thrusts of drills to extract the stones from wherever they were quarried displayed on the sides of the stones like whiplashes or tattoos scraped into the rock, exposing its irregular character and knobbly inclusions. As Pulp once said, this is hardcore, or at least it looks like it might have been destined to be hardcore, but was hijacked by someone in the local council who felt that some cheap and cheerful public art was required in this grubby parkland corner whose peacefulness was frequently punctuated by the screams of visitors to the fun house, and the steady beep beep beep of an adjacent well-used pedestrian crossing.

In fact, like our first stone circle of the day, this circle was once a Gorsedd circle although it was moved a few years after its initial erection in 1899 and elements of the circle have since been removed. These amputations have not served the monument well.

After the crawl, The Walk.

Turning the corner, it opened itself up to us, a remarkable miniature Neolithic-style passage grave, in the garden of a very ordinary looking but nice old building. Behind a fence but this time not caged. This ‘folly’ was built to mark the opening of this building as the Prince of Wales Hospital for Limbless Sailors and Soldiers in 1918, paid for by Miss Cory of Duffryn House. This lovely little thing is a scale replica of the chamber of Maes-y-Felin cromlech found in South Glamorgan. It is known as James Howells Folly (after the house). 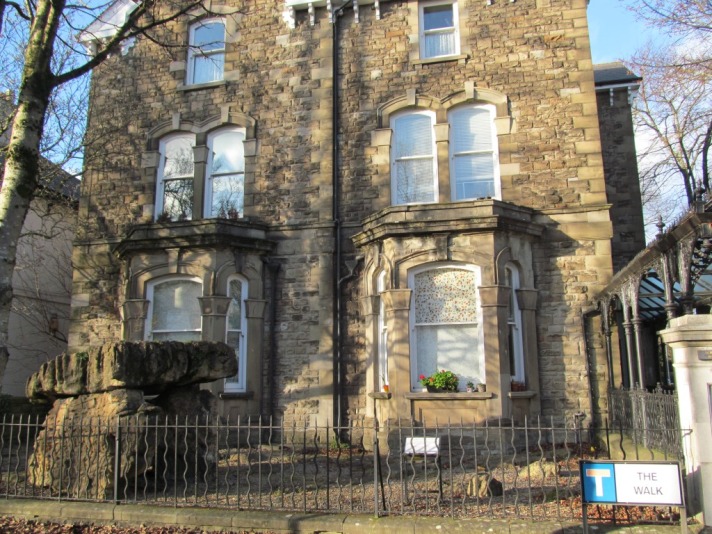 It is a ruggedly beautiful structure, a box made from thick water worn rocks with gravel aggregate flooring. Flat abstract paving stones around the chamber may be suggestive of other elements of this tomb, and one had half an orange laid atop it. This is a garden feature but also a strange and wonderfully conceived and realised gift.

The end of the walk had been reached, and sustenance was sought as the light faded. In a few hours, within a short walk of the commercial heart of Cardiff, we had been fortunate to experience the good, the bad and the ugly of urban prehistory. Megaliths act as memorials and gifts, while stone circles are badly treated and / or ill-conceived. Yet why should we expect the traces and echoes of prehistory in our city centres to be anything other than messy, difficult, challenging or poignant places? How could they not mark some of the great events and themes of our time – war, culture, charity, art, revolution, neglect, creativity.

I still haven’t got my breath back.

Sources and acknowledgements: My New Year treat on 2nd January was to be taken on an urban prehistory tour around central Cardiff by Meli and Steve, both of whom shared memories and information about the locations discussed in this blog post as well as other points on our walk. Jan and I really had a great time. For information on the Gorsedd stones and Bute Park, and some of the excellent archaeological work Meli as done there thanks to the HLF, see the park webpage. And the brief history of the fairground Gorsedd stones can be found here.