‘And, I asked myself at low moments, could I actually solve any of the countless puzzles of prehistory?’

Wet and windy, cold and dreary, another storm. We headed from Haymarket Station in Edinburgh on one of the final days of 2013. We are wet and cold, walking towards the Grassmarket, heading for Festival Square to encounter some spherical urban prehistory. Looking for things made from limestone, granite, stainless steel, bronze, cement, water, light, coins, ball bearings.

And we are not disappointed.

Rounding the corner into the Square, which sits outside the Edinburgh International Conference Centre, the Sheraton Hotel, and some bars and restaurants, we get our first glimpse of what is to come, in the form of tiny brass balls with geometrical patterns, jutting from walls and plinths, for what purpose we could not tell.

Then we saw across the square an assemblage of spherical objects of varying sizes and materials, from quite tiny to rather huge. Taken together, this ‘ball array’ is a sculpture which consists of an apparently random grouping of at least 18 spheres, some of which have the impression of being partially submerged within grass (of this, more later). Balanced on paving stones away from the grass are some of the largest balls, of varying sizes and designs. The backdrop is a massive glassy globe, a sort of greenhouse covered in tiny silvery circles. One peculiar quartz block amongst the balls is an approximation of a spherical form, a little white standing stone. 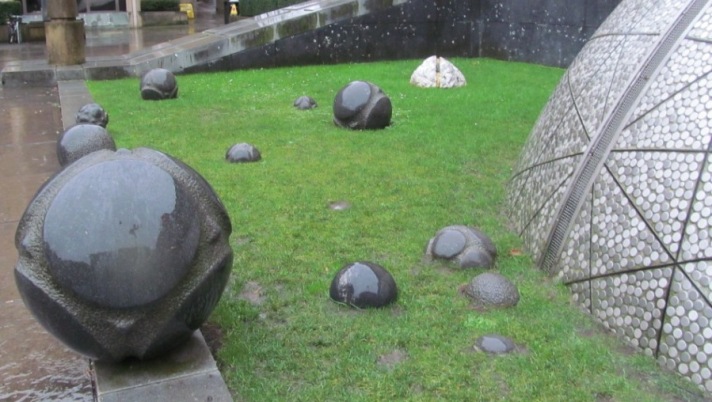 These balls have the superficial appearance of carved stone balls, a Neolithic form of material culture that has faintly bothered archaeologists for over a century, and provoked many wild and wonderful theories from others throughout the same period of time. And as we shall see, these enigmatic stone objects have inspired other recent ventures. 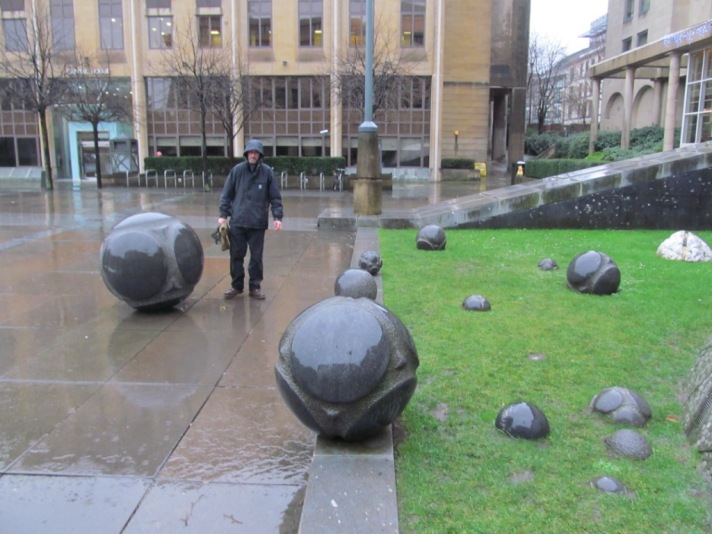 The Festival Square’s equivalents of carved stone balls are component parts of a sculpture called First Conundrum created by artist Remco de Fouw in 2000. A plaque next to the spherical symphony reads:

Ancient carved stone believed to have been formed during the neolithic period have been found throughout Scotland. There are many theories surrounding their possible origin and purpose. They remain a uniquely Scottish mystery that continues to inspire thousands of years later and have been the artist’s inspiration for this artwork.

There is no doubt that carved stone balls are enigmatic objects that were made (rather than ‘formed’ as it says on the plaque which suggests a geological origin) in Scotland in later prehistory, and it also seems likely that these were largely a phenomenon of the north-east of Scotland. The ‘Scottishness’ of these objects is hinted at in First Conundrum, but more explicitly nationalistic, or ‘Celtic’ claims have been made for the CSB format elsewhere in the shape of the rather bizarre Sconestone. This fist-sized spherical object was created by Canadian Warren Macleod in 2009 to inspire acts of kindness across the world. The stone is made from a piece of grey ‘Wonderstone’ and explicitly draws on the carved stone ball template:

The stone really has two inspirations, the first is the actual shape and design of the stone and the second is the spirit of kindness which the stone embodies and symbolizes. The shape of the stone is actually inspired by stone orbs that were sculpted by the neolithic peoples who lived in the northeast of Scotland. What is intriguing about these stones is that nobody knows what they were used for or what they could possibly symbolize.

The idea is that the Sconestone is passed from person to person, with each keeper carrying out an act of kindness, before passing the stone onto someone else, and in the past four years this spherical object has crossed the world and had many keepers. In a stramash of Scottishness one could hardly make up, this stone was launched upon the public by Alex Salmond at a Runrig concert in August 2009 at Scone Palace. The First Minister was happy to support this project, and object, noting at its launch that this ‘initiative can help inspire many people around the globe, while also highlighting Scotland’s ancient heritage and close ties with Canada and other nations of the world’. 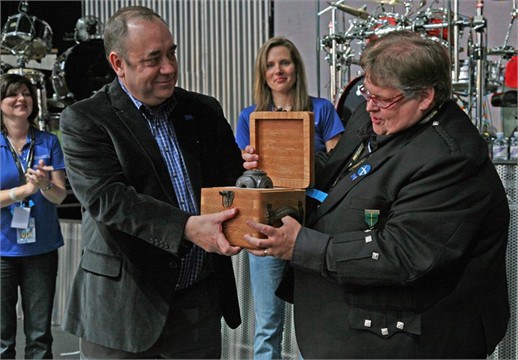 Yet how on earth can we take the basic premise of a 5000 year old form of material culture and then use this as part of the identity of a modern nation state, or representative of some rather woolly modern concept like kindness? Perhaps stone balls were actually used to hit people over the head with – we have lots of examples of Neolithic people in tombs with serious cranial injuries. And there was no such thing as Scotland (or the Celts) in 3000BC.

Perhaps we should draw on some other aspect of the carved stone balls: their otherness, their ambiguity, their beauty. The lack of meaning – we have no idea really what they were used for – could be viewed as a failing on the part of archaeologists. I don’t think this is the case, but I do think First Conundrum offers a really nice way of encouraging wider engagement with carved stone balls, which can be no bad thing. And they have inspired other artists as well, notably Loiuse Tait, whose series Speaking Stones renders carved stone balls in glass.

This spectacular series of colourful glass objects highlights the tactile and powerful nature of carved stone balls, but also reflects the weakness of the ways that archaeologists often deal with such ancient objects. On her website she has noted: ‘The stones are made from glass rather than barricaded behind it’.

So, outside a bar and hotel entrance in Edinburgh, the general public (and publicity hungry actors) have a chance to touch and even climb all over carved metal balls, and so engage with the enigma of carved stone balls: this is a place where a lot of people gather.

And again I think it is the aesthetic qualities of the stone balls that are to the fore; the focus seems to be on the designs and patterns, not the reality of the CSBs, which are all of course much smaller than any of the balls on show. In fact, the average diameter of the Neolithic stone balls is something like 7cm although they are by no means identical in size (the variability in size of the Neolithic stone balls is played out in an exaggerated way in the sculpture).

The original Neolithic balls probably date to the 3rd millennium BC, perhaps a bit earlier. Over 400 have been found in Scotland, and they represent a wide range of forms in terms of decoration and ball shape. Most have been found in Aberdeenshire, suggesting a local tradition with a wide sphere (excuse pun) of influence. Attempts to classify them according to design and form, for instance by Dorothy Marshall in the 1970s, have foundered in the sniggering form of undergraduate students trying to establish the significance of the number of ‘knobs’ on each ball.

Their function is, as already mentioned, the subject of much discussion, with the most authoritative modern accounts written by Mark Edmonds (in 1992) and Gavin MacGregor (1999) focusing on the social and tactile properties of the balls, rather than endlessly speculating on what Neolithic people might have used these things for. The spiral designs, and the number of knobs, are unlikely to ever be intelligible to us; holding them in the palm of one’s hand (where they fit very comfortably) helps make much more sense of the balls. This is illustrated brilliantly by Alice Watterson and Aaron Watson’s images and video of a carved stone ball being rubbed and passed from painted hand to painted hand within a late Neolithic house at Skara Brae: these were objects that could become part of people.

An excellent and measured survey of the balls also appears in the recently published Scottish Archaeological Research Framework (ScARF) document, which focuses on the carved stone balls as objects of personal power. Rather surprisingly, however, ScARF suggests: ‘The fact that they are frequently described as ‘mysterious’ is unhelpful’. Yet the creative responses to stone balls discussed in this post were both inspired by mystery, and perhaps a sense of wonder. And these are powerful tools to help us make sense of the past.

Like so many instances of urban prehistory, First Conundrum’s array of carved balls and associated objects no longer reflects the intentions of the artist who created them. Because in its initial incarnation this was actually a water installation, a fountain – de Fouw characterised it as an open / water feature. Thus the metal balls partially submerged in grass were once partly underwater.

I am not sure when the pond at the base of the largest sphere was replaced with grass, but this seems to me to have removed a lot of the dynamism from this installation. The fountain was actually a fan of water that grew and reduced in a ten minute cycle. Now the stones only get wet when it rains, which as it happens was evident in abundance during our recent visit. Yet dynamism still exists – the largest of the balls seem to be attached to the ground by nothing very much, and it is almost surprising when the big balls fail to roll when pushed. 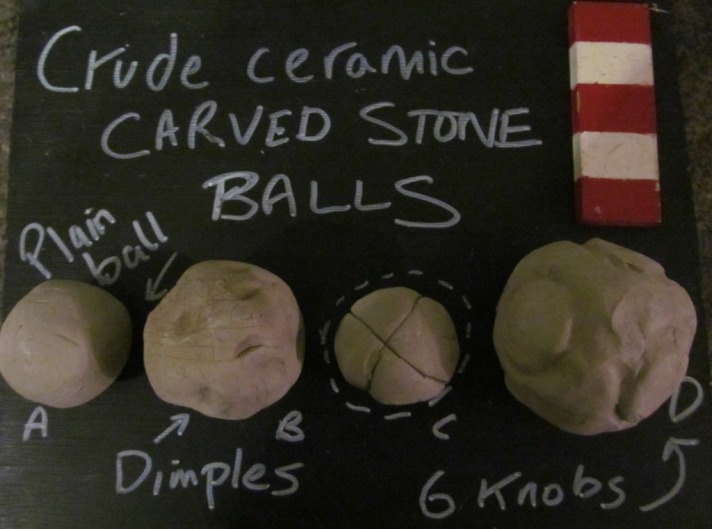 The crappy unfired ceramic balls above are my attempt to replicate carved stone balls, testament to the enduring power these enigmatic and – yes – mysterious objects still have. They inspire archaeologists too, not just artists, whether through Alice and Aaron’s Skara Brae work, or my crude potting, or a friend of mine (another archaeologist) who has three carved stone balls tattooed on his back. CSBs in all of their variants, whether real or imagined, continue to inspire archaeologists and artists and people across the world.

And there is another thing, perhaps. Metallic and granite carved stone balls suggests a certain timelessness in the CSB form: as a concept, it seems indestructible, just as most of the originals seem to have been. And they also have a science fictional quality, time capsules from the ancient past, yet hinting at a weird alien future.

It is always interesting when inspiration in a thoroughly urban context is drawn from the puzzles of prehistory.

Sources: I was accompanied on my trip to First Conundrum by Jan, Meli and the esteemed Dr Mills, all of whom consented to have their photos included in this post, despite their facial expressions. The quote at the start of this post came from David Zink’s 1978 book The Stones of Atlantis (WH Allen), page 68. Information about First Conundrum came from the artist’s own website (link in post), and this was also the source of the fountain photo and the image of the artist. The carved stone ball images came from the Ashmolean museum (photo) and Dorothy Marshall’s article on Carved Stone Balls in the Proceedings of the Society of Antiquaries of Scotland vol 108 (line drawing). Information (and quotations and images) related to the Sconestone came from the webpage for this project (link in post) and I am also grateful to Warren Macleod for previous correspondence on this strange object. The Louise Tait information and image came from her website while the James Nesbitt photo came from the website of the Edinburgh Film Festival. Thanks to Gavin for showing me his tattoos!

3 thoughts on “Puzzles of prehistory”