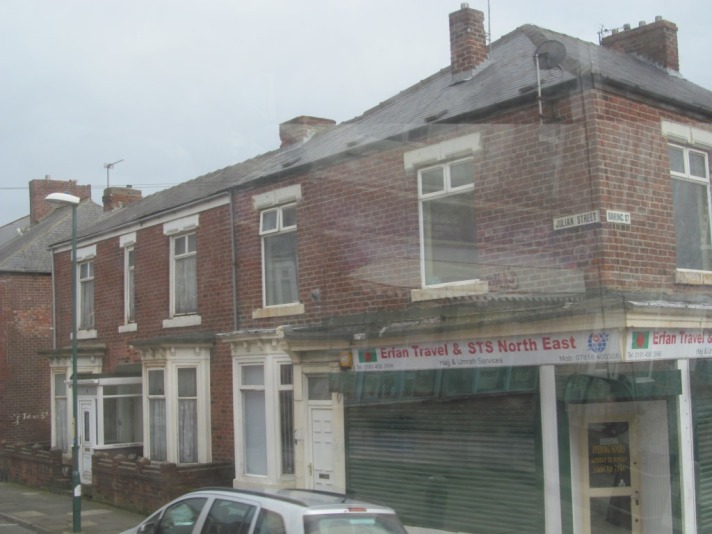 South Shields, in Tyne and Wear, is best known in archaeological circles as the location of Arbeia Roman Fort, a coastal supply base for Hadrian’s Wall. Unlike the dry and grey ruins of the forts on the Wall, or the seemingly endless excavations at the sprawling Vindolanda, South Shields has been the location of innovative, imaginative and colourful reconstructions. All of this in the heart of urban South Shields. 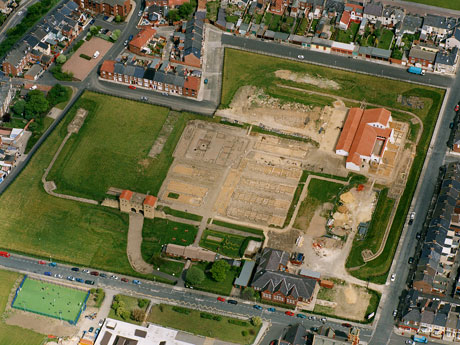 Modern excavations of the fort and surrounds began in 1983. This total excavation (as this methodology was once called) revealed a sequence of different phases of fort construction and expansion, and a lot of other Roman stuff. However, South Shields is more notable for its remarkable reconstructions. The south west gatehouse was built in the late 1980s, with two upper floors and an outdoor walkway, and this was followed by the more recent construction of a Commanding Officer’s House and Barracks Block. These remarkable structures give a real flavour of the way that the Roman officer class imported the colour, hygiene and luxury of Mediterranean living (as far as was possible) to this northern edge of the Empire. 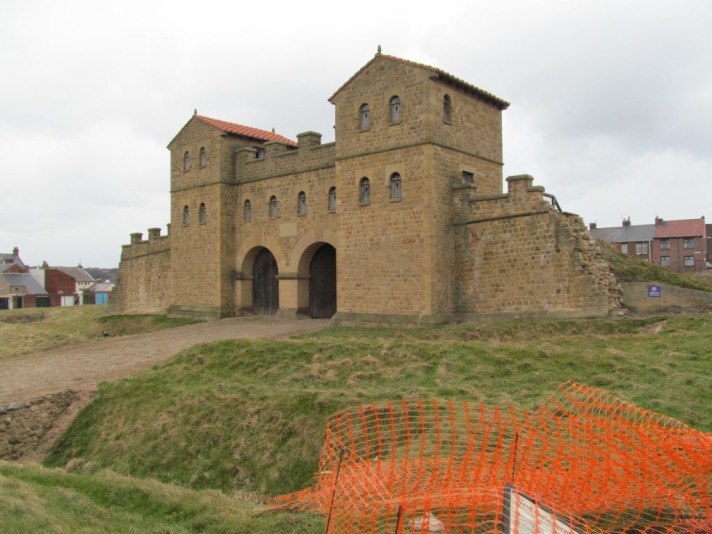 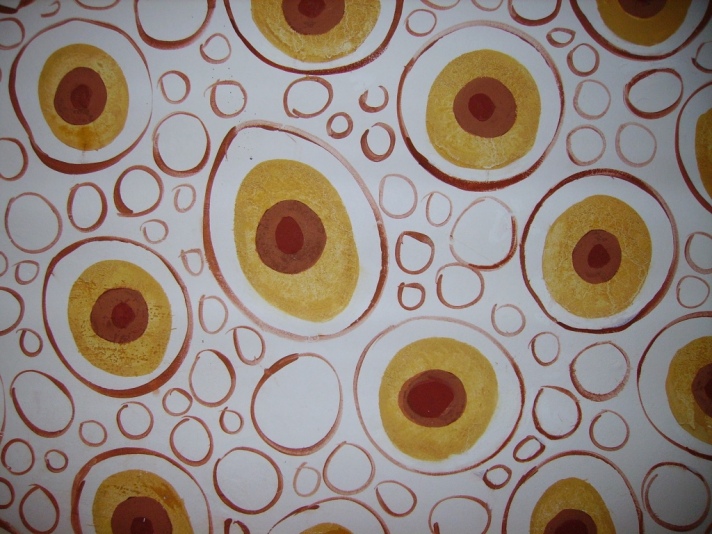 These reconstructions have always been a bit controversial amongst archaeologists, built on the footprint of the original buildings and structures, and of course they involve a fair degree of speculation (and in some respects, might even be wrong). But they also represent exciting and colourful spaces that can fire the imagination of visitors.

However, although I do enjoy the reconstructions at Arbeia, what has always fascinated me about this place is that it sits within an urban place, surrounded on three sides by rows of houses, and on the other by a primary school. I have visited this fort on several occasions and this has always struck me as an interesting juxtaposition. Although the reconstructed elements of the fort make it look like a place out of time, it offers a valuable local resource, increasingly marketed and advertised in the locality by road signs and Roman bits and pieces in the vicinity, as well as being immortalised in the street names of the urban grid around the fort, with roads named after various Roman emperors, the street names I started this blog with.

But before this blog transforms into an Urban Romanist love in, it is worth pointing out that of course the Romans were not the first people to occupy this piece of real estate. Excavations at South Shields over the past three decades have revealed a series of prehistoric sites and monuments beneath the fort, and within the surrounding environs. In fact, the existence of the fort has facilitated the survival of a spread of prehistoric sites, features and material culture within this urban space. The excavators have noted, ‘the overlying Roman stratigraphy, while removing some of the immediately pre-Roman horizon, had sealed and preserved the earlier iron-age structures and the contours of their contemporary ground surface’. And of course it is likely that no prehistoric traces would have been found here anyway, if the Roman fort had not attracted archaeologists with their trowels. And so at last we have some indication of what the Romans have done for us.

Various bits and pieces of ephemeral prehistoric traces were found: for instance a Mesolithic soil horizon (sexy!) and some Neolithic scoops, pits, postholes, hollows and slots, some of which may have represented structures or post-settings. The presence of burnt daub suggests there may have been one or more building here, maybe a Neolithic house or shelter. These finds were accompanied by an assemblage of prehistoric worked lithics. Some of these were microliths (these are Mesolithic), suggesting thousands of years of low level activity and occupation in earlier prehistory at South Shields. Later prehistoric traces were more substantial, none more so than a roundhouse that was found beneath the corner of one phase of the Roman fort, part of a farmsteading. 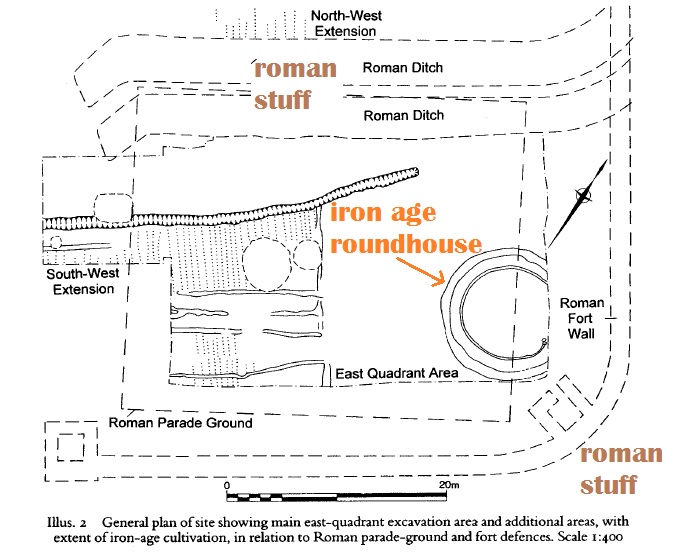 This roundhouse would have been a relatively substantial building, almost 9m in diameter with a post and plank built wall, and a high pointy (= technical term) roof. A reconstruction of the roundhouse and some of the features found around it is displayed in the reconstructed Roman gatehouse. 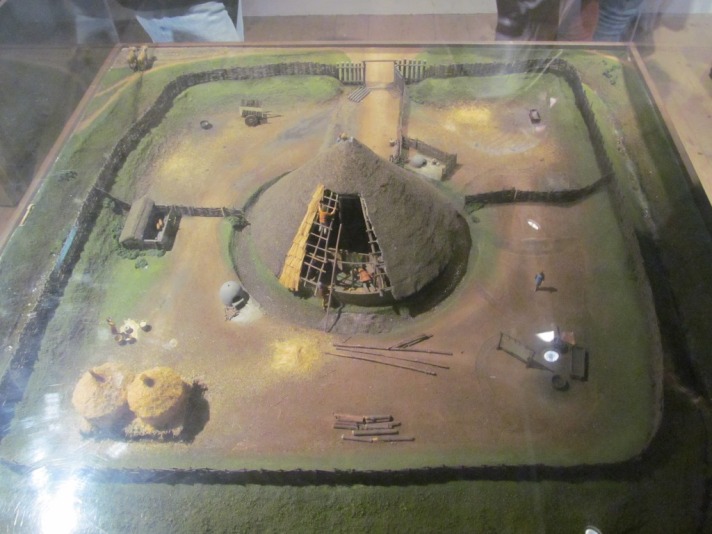 The house interior had evidence for a hearth, and storage pit. It would have been large enough to support a family group, and was associated with agricultural activities. The people who lived in this house grew wheat and barley, and ate wild fruit and nuts. At the end of its life, the house burnt down: whether this was a deliberate or accidental act is unknown.

When the Roman arrived here in the second century AD, and militarised this place that had once been a farm, they would have had no sense that a single phase house had once stood in the place that would become a parade ground for Roman troops. Buried beneath layers of Roman activity, including the compact clay and boulder surface of the parade ground, the prehistory was sealed in. In the same way, the presence of Roman walls and ruins acted as a seal to preserve and protect the more fragile archaeology within the fort, protected from the rise of urbanisation that eventually engulfed this location. One Empire was replaced by another Empire, and layer upon layer accrued through time. The nature of stratigraphy is that one thing buries another, eradicating and preserving, a build-up of layers of the past that in the case of South Shields lie underneath, amidst and around an urban landscape. 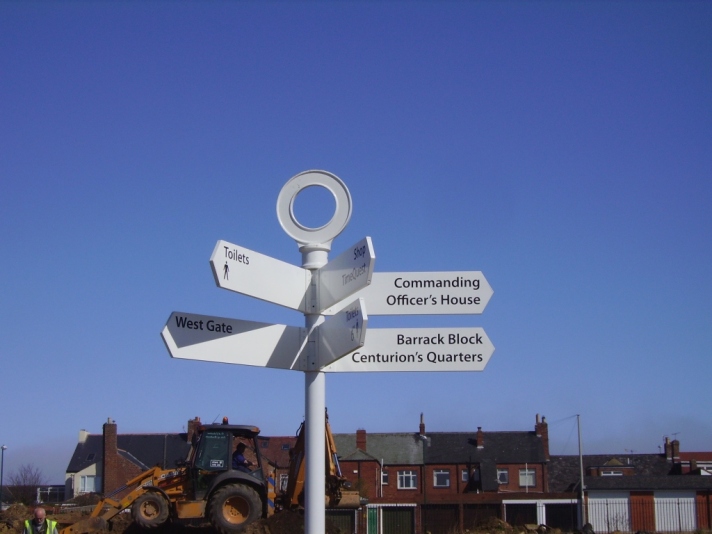 At the risk of sounding like my non-existent evil twin, the Urban Romanist, there is an interesting coda to the South Shields story. In 2012 Tyne and Wear Archives and Museums were awarded a £400,000 Heritage Lottery Funded project entitled ‘Hadrian’s Wall and its Legacy in Tyneside’. This project is a community archaeology scheme and:

… will unearth details about the lesser-known sections of Hadrian’s Wall, including large sections which are hidden under modern roads and buildings, and to raise awareness of the Wall in local communities. 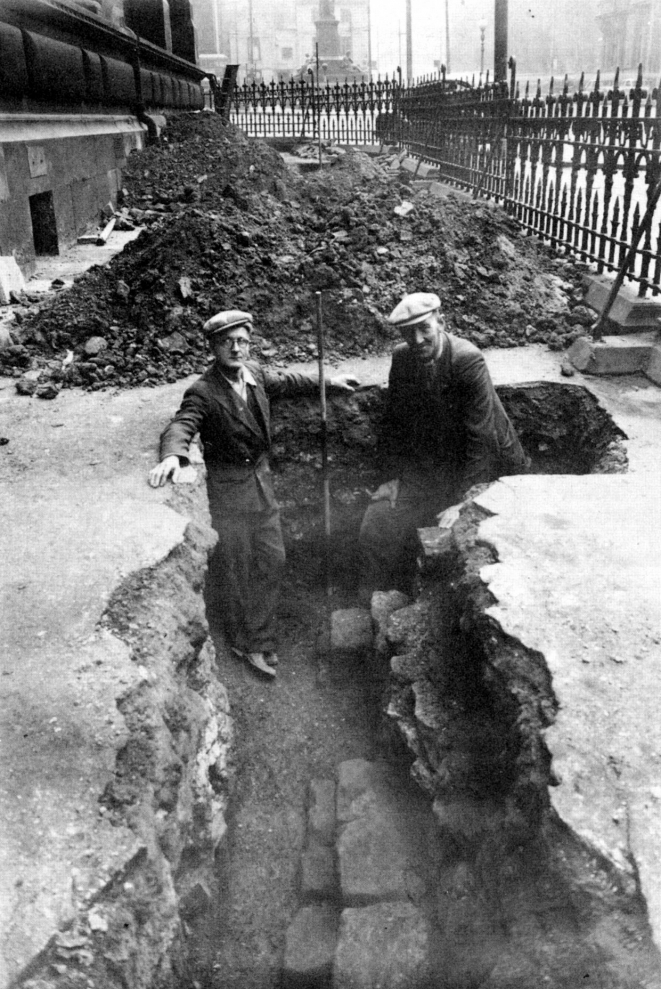 This remarkable photograph shows an excavation in Newcastle City Centre in 1952, with hints of Hadrian’s Wall popping out of the trench. This reminds us, as if this needed to be said, that world class archaeology (prehistoric and otherwise) can and does still exist within and beneath urban landscapes today – even in city centres and housing estates. This HLF Project also suggests that exploring archaeology can be beneficial to local communities, through empowering and informing people, as well as offerings opportunities to learn new skills and volunteer. 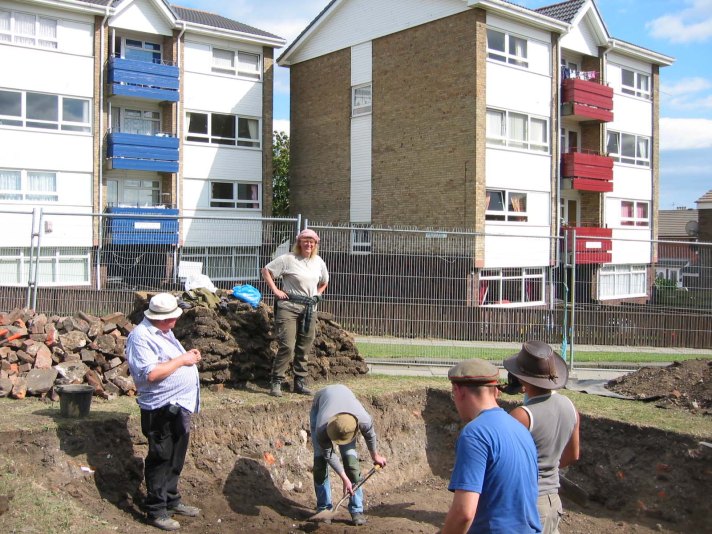 And this principal is at work at South Shields, with an ongoing community archaeology project, part of the WallQuest Project which is funded by the same HLF funds mentioned above. In South Shields since 2012 local people and volunteers have been excavating at the site of the civilian settlement, a sprawl of buildings and services that would have been situated immediately outwith the fort. This ongoing work ‘will open up the excavation programme to participants from the local community, and provide opportunities for participants to work with artefacts and learn how to analyse excavation records’.

Even in the most unpromising of places, places that are urban and covered in houses and tarmac, traces of the distant past still exist, and have a good deal of potential that we should be ready and willing to take advantage of for the benefit of everyone, not just archaeologists.

Sources: Almost all of the information about prehistoric South Shields was derived from this excavation report: Hodgson, N, Stobbs, GC and van der Veen, M 2001 An Iron Age settlement and remains of earlier prehistoric date beneath South Shields Roman Fort, Tyne and Wear, from the Archaeological Journal 158, 62-160. This paper was the source of the quote about the preserving qualities of Roman archaeology, and also I amended / reproduced three drawings from this report. On my last visit, Nick Hodgson, archaeological projects manager for Tyne Wear Archives and Museums was kind enough to point out the location of the Iron Age roundhouse to me. Information on the HLF award, and the 1952 image, came from the Tyne and Wear Museums Arbeia webpage news section. The South Shields road sign image was source from a great website, followthebrownsigns.com, the content of which is encapsulated in the site’s name. The air photo of the fort is available widely online and the final South Shields community excavation photo came from the WallQuest webpage. For more information on the fort, go to the webpages of the Arbeia Society and the fort itself.