The National Monuments Record of Scotland (NMRS) is a wonderful thing, accessed remotely via the CANMORE portal, offering a window onto tens of thousands of mostly old things around Scotland. I use the word ‘thing’ here because it is difficult to summarise the content of the NMRS without recourse to such a vague term. At a slightly more specific level, the kinds of things you can expect to find while browsing in the NMRS includes archaeological sites, historic buildings, material culture, shipwrecks, cropmark sites, events (such as watching briefs or surveys), natural features, public art and sculptures, and perhaps surprisingly, some very modern phenomena such as tower blocks and – much to my amazement – roundabouts. I stumbled upon the NMRS category ‘roundabout’ when exploring the urban prehistory of East Kilbride (note to self: there is not much urban prehistory in EK, but there are many, many roundabouts). I could not resist exploring a little further.

The term roundabout is contained within the NMRS Thesaurus of Monument Types, and defined concisely as: ‘A circular construction at the intersection of two or more roads to aid the passage of vehicles from one road to another.’ This definition has a certain poetic quality to it. The term roundabout exists within a hierarchy of terms, which widen out to Road Transport Site and then more widely still, simply Transport. (As an archaeologist, I would define a roundabout as a circular or oval space upon which no-one is intended to set foot enclosed by roads.) Although circular junctions existed in various places earlier in the twentieth century, the widespread use of roundabouts on Britain’s roads dates back to as recently as the 1960s. The roundabout as a formal junction type was introduced by Transport Research Laboratory engineers, followed soon by legislation to standardise the use of roundabouts, that is, the ‘offside priority rule’, which was passed in 1966. The mini roundabout was first created in 1976, the invention of Frank Blackmore. The role of roundabouts is very simple: they keep traffic flowing at junctions in a way that traffic lights and other types of junction could not. 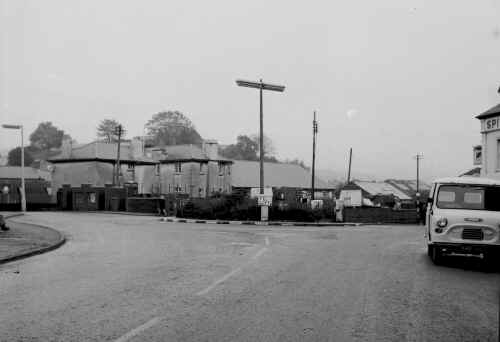 This fascinating road engineering history takes us little closer to finding out why ‘roundabout’ is a class of monument within the NMRS. To investigate this further, I searched the NMRS using the keyword ‘roundabout’ to see what kinds of things had been included. In fact only two roundabouts in all of Scotland have actually been given their own NMRS number; most of the search results (24 in total) relate to sites with some connection to a roundabout in their location or name. For instance, in one case a roundabout is included almost incidentally because it contains a sculpture of two beavers at the entrance to Beaverbank Business Park in Edinburgh (NMRS number NT27NE 1682).

The two NMRS roundabouts are, perhaps not surprisingly, in two of Scotland’s new towns. The first of these is the Torrance Roundabout in East Kilbride. This traffic island sits on the south side of the town, on the junction between the A726 Strathaven Road, Greenhills Road and Torrance Wynd. The presence of this roundabout in the NMRS is inexplicable (it has NMRS number NS65SW 181, grid reference NS 64625 52026). I visited this roundabout and found it to be a featureless traffic island without even a hint of landscaping within the centre, nothing more than a flat-topped low monoblock round mound with road signs and a single advertisement perched on top. In a town that is, in a sense, defined by its roundabouts the Torrance Roundabout is not even the most interesting roundabout in East Kilbride. 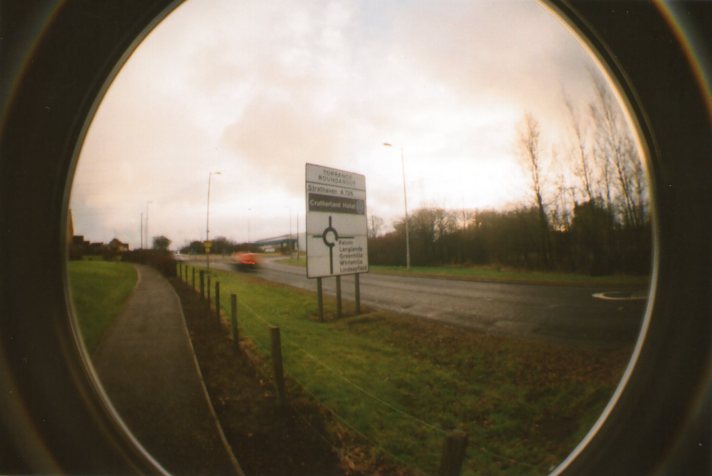 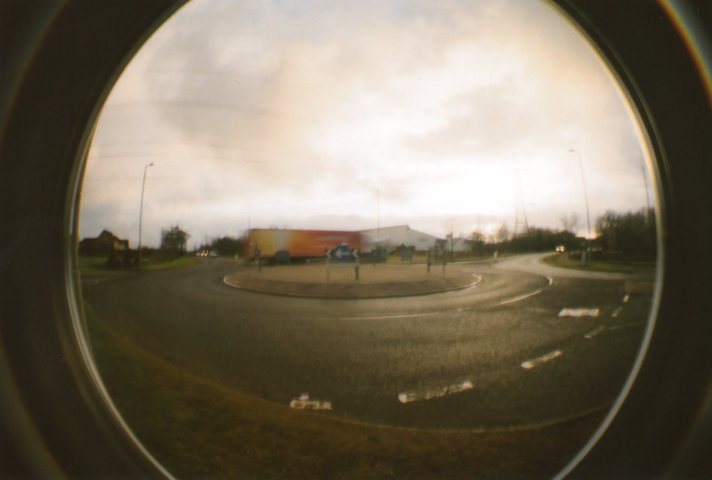 In fact, there are well over 60 roundabouts in EK, part of the vision of the town’s New Town Development Corporation which existed between 1947 and 1996. Roundabouts should be viewed within the context of the utopian ideals that lay behind the development of Scotland’s post-war New Towns: modern, clean and efficient creations that facilitated the smooth flow of traffic. Now, most just of these roundabouts just look a bit shabby.

The other roundabout named in the NMRS is in one of Scotland’s other New Towns, Cumbernauld. The inclusion of Muirhead Roundabout (NS77NE 181) is equally puzzling. Three very nice aerial photographs of the roundabout and adjacent tower blocks are included in CANMORE for public access and show more of an intersection than a roundabout, essentially a means to connect a series of local roads with the main A8011 which runs below. The presence of some artworks beneath the roundabout – ‘neon waves’ – on the side of the A8011 does not appear to be the focus of the photos. This roundabout served as a useful detour for traffic when the Olympic torch relay passed nearby on 28th May 2012. I did not visit this roundabout in preparation for this blog although in the past I may have driven beneath it.

Roundabouts are found at junctions, road confluences, and are nodal points in our transport system, and so in some ways at least they function rather like some monuments would have in prehistory. And so it is intriguing to think about roundabouts which sit in locations that were important in the past. One example of this is the Greenyards Roundabout, on the edge of Bannockburn, Stirling, which was constructed in 2010. I went to this location in November of that year specifically to visit the site of a Neolithic monument that had once stood in this place. This was a complex of early Neolithic postholes and pits, remnants of a timber cursus monument with adjacent u-shaped pit-defined enclosure (NMRS numbers NS89SW 24 and 22 respectively). These monuments were excavated by the Central Excavation Unit in 1984-85 ahead of the construction of a housing development and the ‘Stirling Eastern Distributor Road’ (the A91). Now destroyed, or only with ephemeral vestiges surviving under tarmac, houses and gardens, nothing can be seen of the ghostly traces of this prehistoric ceremonial complex. The Laurinda Bed and Breakfast lies over part of the western end of the cursus.

This complex suffered a further intervention between November 2009 and February 2010 with the construction of a new roundabout where the Cowie Road meets the A91 on the eastern fringes of the housing development, adjacent to a bus depot. This location is just to the north of the two aforementioned early Neolithic enclosures. 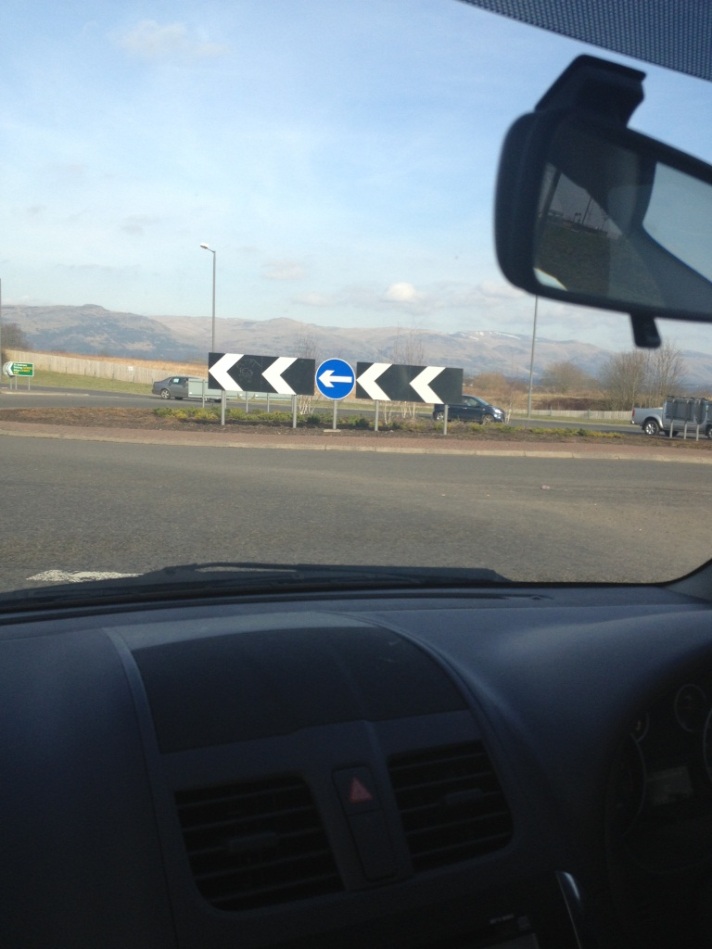 Excavations revealed one or two later prehistoric roundhouses (one of which dates to the middle of the 2nd millennium BC) as well as assorted postholes and pits (see NMRS NS89SW 155). This cluster of features is, in a sense, unremarkable, and fits a pattern of later prehistoric settlement in the vicinity in the form of Iron Age enclosures found during the 1984 campaign of developer-funded fieldwork to the north. But the recurring significance of this landscape revealed by all of these excavations is interesting: hints of Mesolithic activity, Neolithic ceremony and fire-lighting, Bronze Age roundhouses, Iron Age fortification, indications of Medieval activity in the form of ‘black oat’, post-medieval rig and furrow agriculture, bus hanger, an A road, housing estate, with the roundabout merely the latest aspect of the biography of this location, a location with splendid views of the Ochils to the north. 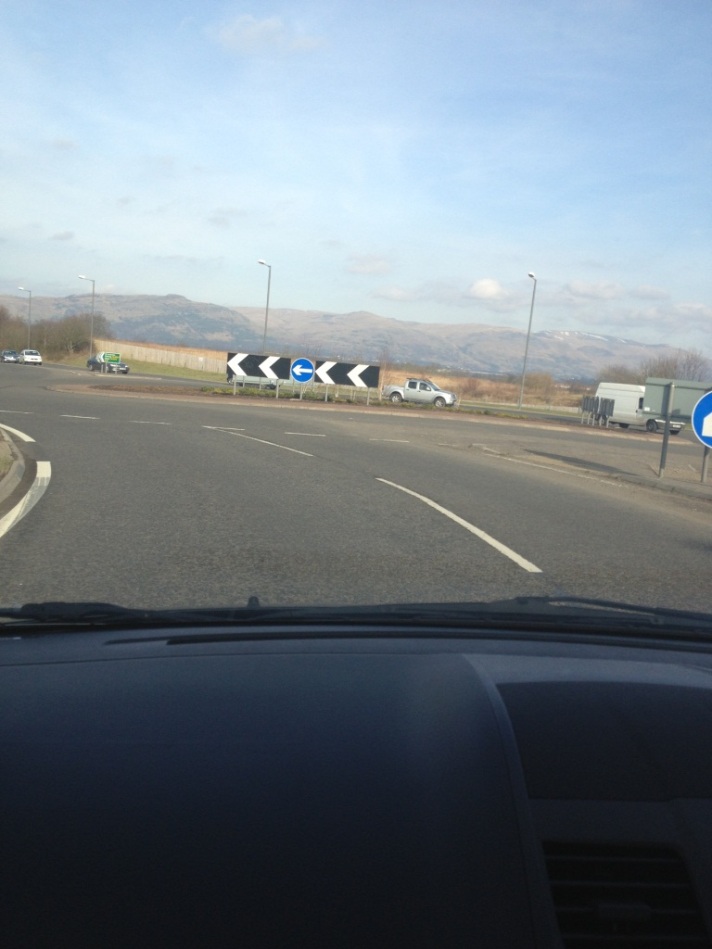 JG Ballard’s 1974 book Concrete Island tells the parable of an architect who has a car accident while commuting and crashes into a traffic island in a tangle of roads, junctions and intersections. He becomes trapped on the island by a wall of roads and cars that he can neither pass, nor flag down. The transgression of actually being in the middle of a roundabout is viewed by Ballard as a modern parable for the commuter lifestyle and the dis-association between people caused by cars and roads. And indeed being in a roundabout is a strange sensation, as I found out when visiting the middle of the Torrance Roundabout. I had a strong sensation that this was somewhere where one should not go, and once there, it can be difficult to get off again safely. People in passing cars stared at me disapprovingly. Standing on a concrete island is an anti-social activity and leaves you vulnerable and exposed.

My recent experiences at Torrance and Greenyards were in stark contrast. I visited the thoroughly modern EK roundabout on foot to experience its featurelessness, but drove round the Greenyards roundabout a few days later, conscious that I was passing over a place that had been significant for thousands of years. The ways that our experiences of the past are mediated can entail many different methods: by foot, by car, by bike, bus or train. And as ever, the past has become entangled in the present because even today we are still building monuments.

Sources: For more information on the Bannockburn cursus excavations in the 1980s, see Rideout, J.S. 1997 Excavation of Neolithic enclosures at Cowie Road, Bannockburn, 1984-5. Proceedings of the Society of Antiquaries of Scotland (PSAS) 127, 29–68. The Greenyards Roundabout excavations have not yet been fully published; see Mitchell and Hastie’s brief note in Discovery and Excavation in Scotland 11, page 170 (you can read this in CANMORE). For more on the Iron Age enclosure excavations, see Rideout, J.S. 1996 Excavation of a promontory fort and palisaded homestead at Lower Greenyards, Bannockburn, Stirlingshire, 1982-1985 in PSAS 126, 199-269. (PSAS back issues can be accessed free online via the Society’s webpage.) Background information on the Torrance and Muirhead Roundabouts came from the North and South Lanarkshire Council webpages, while the ethos behind the establishment of East Kilbride can be explored further at this webpage.  The Georgetown roundabout photograph (the first image in this blog) was sourced from a website dedicated to ‘Flying the Flag for Merthyr Tydfil all around the World’; I hope I have done my bit for the cause here. The Whitemoss roundabout photo was sourced from the East Kilbride News website. The extract from the 1940s Highway Code, and the Concrete Island cover, are available widely online, while the 1978 Highway Code cover is a free image sourced from the difitalimaj website. Jan took the photos of the Greenyards Roundabout as I drove up to and around it.