I went on a fieldtrip on Saturday with Sam to Fife. Ostensibly the journey was to visit the location of a Bronze Age cemetery that had been found by chance during house construction work in the 1970s in Dunfermline, but this expanded to a visit to a second location, a standing stone situated just a few hundred metres to the west. These two locations – the standing stone and the cemetery – were treated very differently during the post-war urban expansion of Dunfermline. One was excavated thoroughly, and then forgotten. The other was monkeyed about with, left on display and had a pathway named in its honour. Yet it was the invisible prehistory that had more impact on me on my visit to Pitcorthie.

In the 1950s the site of the standing stone and cemetery was still ‘all fields’ as they say with farms Easter and Wester Pitcorthie eventually giving their name to the suburb that would emerge here. The standing stone appears on some old OS mapping, such as the six inch 1st edition Fifeshire sheet 35 (published in 1856) marked simply as ‘stone’. The cemetery was unknown until its accidental discovery during Scottish Special Housing Association (SSHA) works in 1972. A lot of the post-war housing in southern Dunfermline was constructed by the SSHA. This was a government-founded agency that was established in 1937 and was involved in the construction and maintenance of ‘social housing’. One of the most notable projects the organisation was involved in was Glasgow Eastern Areas Renewal (GEAR) in the 1970s. This pseudo-quango was wound up in 1989 at the time my father worked for them, and they became Scottish Homes. 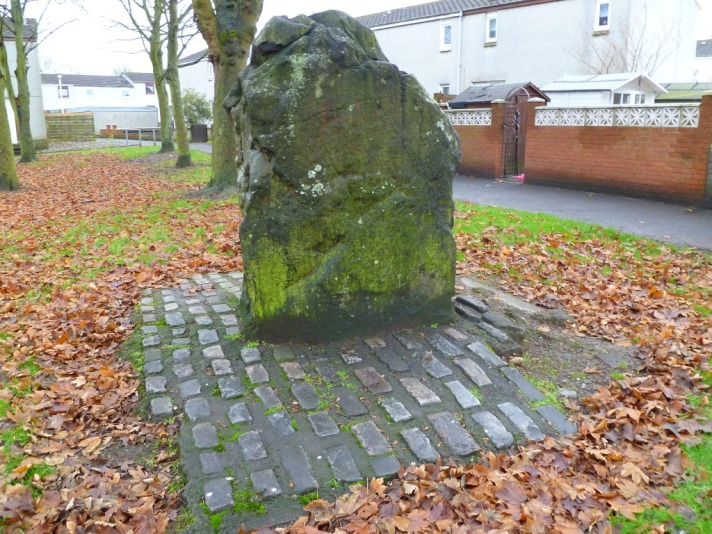 Urban development inevitably impacted on the prehistoric archaeology of this area (sadly no longer called Fifeshire). The terrace of land to the north of the Forth has a sequence of Bronze Age monuments scattered along it, including a series of isolated standing stones and the famous Lundin Links stone setting (NMRS number NO40SW 1) with its weird monoliths. The latter monument sits within a golf course, one of several prehistoric monuments that have become obstacles (and targets?) for golfers in Scotland. And located on what was once outside Dunfermline was a single, lumpy standing stone, known as Easter Pitcorthie (NT18NW 4). When visited by RCAHMS in 1925, the stone still sat in a field and was described as being just under 2m tall and made of sandstone; stones clustered around the base, although their relationship to the standing stone was unknown. The stone still looked rather like this in 1959, but at some time in the 1960s, as urbanisation spread to this location, the stone was transformed by the construction of an irregular square of cobbles, or setts, around its base. The ‘landscaping’ of this stone was, I assume, not accompanied by an invasive excavation as no record of such an act exists. The stone became the centrepiece of a small square sloping piece of grassland, with houses on all sides, and assorted trees in the vicinity. The pathway that ran past the megalith was called Standing Stone Walk. It appears that this was to be ‘a feature of interest to the local population’ (Close-Brooks et al 1972). 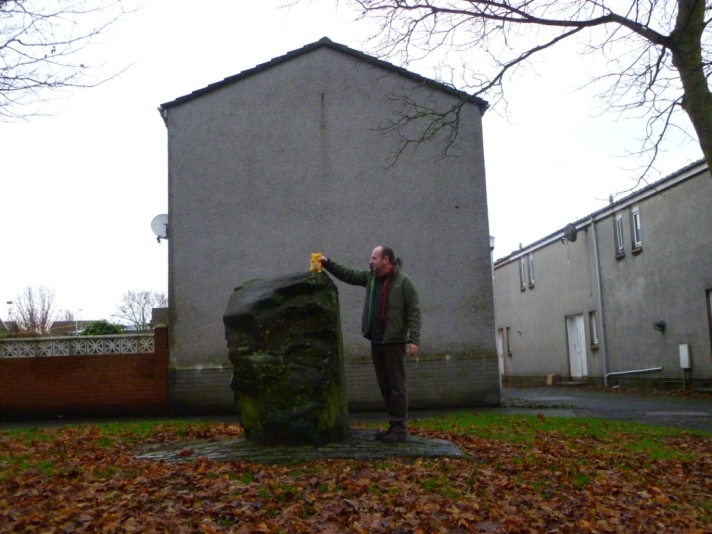 The stone today is surrounded by concrete, literally and metaphorically. It sits forlornly adjacent to some back gardens, covered in slimy green moss and even the red graffiti daubed on its western side has faded to unintelligibility. Broken glass and weeds had replaced the stones that once sat at the base of the stone, while the paved setting looks like it is now a few bricks short of a patio. A child ran past and told us he was able to climb on top of the stone, but we did not ask him to demonstrate. Urban prehistory can take on many forms, but most commonly it is banal, and even the most powerful and obvious juxtapostions (or indeed contrived juxtapositions) cannot revive the pastness of these places.

Just 350m to the west, house-building continued, and an altogether more troubling and problematic (and expensive) prehistoric site was located in 31st March 1972. A machine driven by Mr M Miller dislodged the capstone of a cist; the driver jumped down and started to clear out the contents of the cist with a shovel, stopping only when he found a human skull. By the 1st of April, five burials had been found and fully excavated, while a sixth was located and investigated ten days after that. Little time was lost on the build, with the cemetery location just beyond the back gardens of several houses on what was to become Mathieson Place. (This site is commonly known as Aberdour Road, NMRS number NT18NW 13).

Three cist burials were found in all, plus two cremations and one cremated burial associated with a Food Vessel pot sat within a stone setting. The survival of materials within these burials was varied, but suggests some interesting and unusual burials. A young female lay crouched in one cist, the leg bones of three different young pig bones laid around her knees (burial 1), while the crouched burial of an adolescent was accompanied by a lump of iron ore, possibly a component of a fire-making kit (burial 3). One cremation (burial 5) consisted of the remains of two people, buried together, with a single bone pin, which may once have held together a bag that contained the bone and ash. In one cist (burial 2), all that survived of the body was chemical traces, indicated by sampling for phosphorus.

All of this was recovered despite the ‘large-scale destruction by earth-moving machinery’ recorded by the excavator: in finding these sites, cist slabs were smashed, and some pottery was broken by the bulldozer.

The location of this cemetery today is easily accessible via a pathway at the eastern end of Mathieson Place. Sitting on a ridge, overlooking a park and surrounded by houses, the cemetery is now a piece of grassland and is not marked in any way. A few hollows in the grass hint at locations where burials were located. Debris from activities being undertaken in the park were noted: a glass Irn Bru bottle lying in the vicinity of burial 5, beer cans and bottles in an scrubby area just to the SE.  Yet there is no sense that this was once an ancient burial ground, a sacred place in the Bronze Age where at least seven people were laid to rest. The remains have now been removed, but plans by SSHA to mark the spot by returning the cist slabs obviously came to nothing. The location of cremation burial 6 lies just 5m from someone’s back garden, yet who actually knows about any of this? 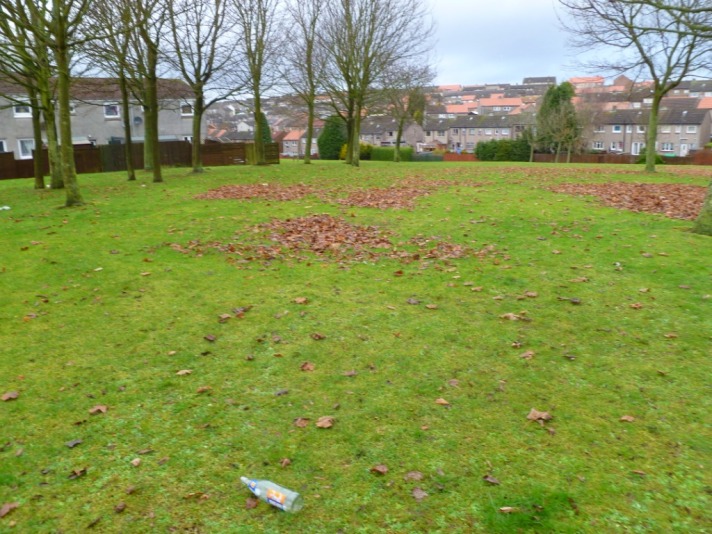 It is profoundly sad, I think, that the burial of this small group of people is not marked in any way; it is a shame that the SSHA aspiration in the early 1970s came to nothing. It was easy to leave the standing stone where it stood nearby and incorporate it into the fabric of modern Dunfermline using building materials that were to hand, whereas when skulls start to pop out of the ground, something has to be done to facilitate development. This is the fate of many accidentally found prehistoric cemeteries, unmarked and forgotten except in exceptional circumstances. An appendix in the Aberdour Road report briefly records a third prehistoric engagement during the urbanisation of Dunfermline, in the nearby village of Crossford. Workmen on the construction of a new road uncovered on 13th November 1973 what they thought was a drain, but was in fact a Bronze Age short cist burial (NT08NE 36). A Mr A Hall recovered a Food Vessel pot from the drain-grave but within a week this burial had been buried once again, this time under the foundations of the new road. The location of this burial is on the junction of Morar Road and Affric Way if you care to visit.

Do we need to show our respect to the ancient dead? Have we done this by carefully removing the dead and their grave goods in controlled excavations rather than simply bulldozing them away? Are our excavation reports, our records and our dots on maps suitable epitaphs? Have we memorialised these people archaeologically? Do these places cease to be meaningful once the physical remnants of mortuary rites have been removed? I am not sure what the answers to any of these questions are, but I am uneasy about us concluding excavation projects and forgetting these places. In Dunfermline, I encountered two forgotten prehistoric monuments: one hidden from view, the other hidden for everyone to see. But who cares?

Sources: Many thanks to Sam who accompanied me on the fieldtrip to Dunfermline and took some of the photos used here, and to Donald for inviting us to the town in the first place. Most of the information on the history of the Easter Pitcorthie standing stone was derived from the National Monuments Record of Scotland. The excavation report for the Aderdour Road cemetery, and the Crossford Food Vessel burial, is: Close-Brooks, J, Norgate, M & Ritchie, JNG 1972 A Bronze Age cemetery at Aderdour Road, Dunfermline, Fife. Proceedings of the Society of Antiquaries of Scotland 104, 121-36. This journal, PSAS, can be accessed free online via the Society of Antiquaries of Scotland website. The plan of the cemetery was derived from various illustrations in this report, as was the phosphorus data.